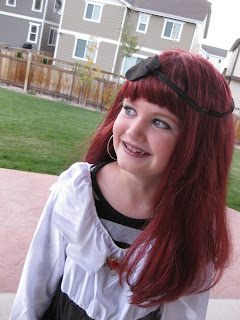 I have never bought a Halloween costume… 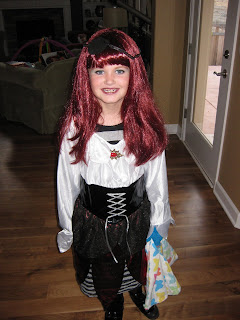 …until October 30th, 2010. Emily changed her mind at the last minute of what she wanted to be. I hadn’t technically made her a Halloween costume, per se. Last year in school she did a report on the American Revolution and I made her a Betsy Ross costume. 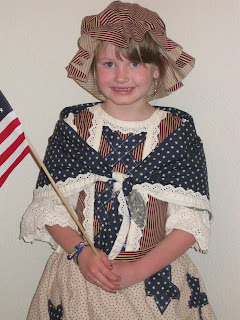 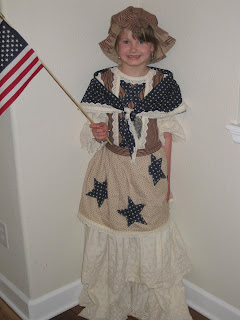 And by “I made” I mean, baby, I went all out…like OCD style. At that time I informed Em that she was going to get two uses out of the costume, thus wearing it for Halloween. She was totally game. She thought that was great!

Then, I realized that I was being a bit neurotic. I told her she could be anything she wanted…but that because of the time frame, I wasn’t going to be able to make her a costume. It left a pit in my stomach.

Now, I’m not judging you if you buy a costume. Many costumes at stores are actually great…even better than homemade. But for me it’s fun to make up a costume from either thrift store finds, a pattern or from scratch. I enjoy it…and it’s all I’ve ever known.

My mom always made our costumes…my little sister even came over the day before Halloween and saw the package on the chair…She looked at me strange and said, “What is that?” She had never seen this in her 32 years and 2 months, either…

Anyway, Em drew up a design…it bordered Rock Star and Pirate. But no matter what, for 3 days straight, all she talked about was she wanted a redhead wig…that HAD to be part of the costume.

So, there you go. Em was a pirate. Here’s her blog on it… Go there to find out what we’re going to do with her candy.

And here’s my little baby bear. I did not make his costume…GAP did. When I was preggers with Ryan I went to the GAP just to check it out. I saw this outfit and it was all I could think about!

But now, this little handsome guy is all I can think about! 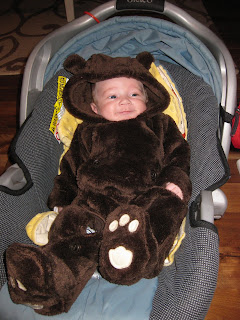 5 thoughts on “My cutie patooties!”