Sorry! I literally did not intend to leave you hanging but between poopy diapers, homeschooling, pumping, trying to keep my kitchen clean, showering periodically, making meals, snuggling, etc, apparently big nuggets of time are no longer at my disposal. Today I did, however, stay up after Ryan’s 5:00 a.m. feeding and do Turbo Jam, as well as showered and made breakfast with Emily. Some days I brush my teeth and that’s fabulous. Other days I surprise myself and actually get other things accomplished. My goal each day, however, is to smooch the heck out of my tasty baby boy and stare at my beautiful 8 year old as she learns about God’s beautiful love for her and the world. (And, of course, as you might imagine, I wrote the above paragraph two days ago and haven’t worked out or showered since…)

So, as I said, that is when the whole scene turned emotional. Honestly, I felt like I was in the Twilight Zone. Everything seemed like deja-vu with Noah’s delivery.

Okay, so she was probably going to send me home…I mean, I was at a “One” for Pete’s sake. And, I learned the inside scoop: nurses and doctors only consider the actual act of PUSHING labor!!!!! I’ll give you labor! $%^&*(

Anyway, where was I? Okay, so, I was at a “One”…we’ve determined that. The problem was the nurse determined this just before shift change so I had to sit and wait for the next nurse to come in and see if anything else had happened. That nurse did come in…and nothing had happened.

So, she sent me on a walk for an hour. I walked the old halls where Emily had been born. They were remodeling areas of the floor, so it was nice and quiet…but it was mauve since that particular wing hadn’t been remodeled yet, and let’s be honest…mauve is gross. So, I headed back to the room to see if there had been any progression.

BUT, the nurse wanted to do one more “procedure”.

Did you know that pulling your cervix forward when its facing backwards hurts like a mother #$%^&*(?!?!

Uh, yeah! She was a great nurse and really on top of things (one of my BFF’s is an L and D nurse, so she was checking in every so often and told me my nurse was good…), but all she said was, “This is going to hurt but the rest of the checks won’t hurt as much…”

I literally almost shot up over the top of the bed! I screamed like a baby and when she was done, I literally rolled over onto my side and sobbed to Jason. I told him I wanted my Pooh Bear (yes, I do still sleep with my 38 year old Winnie the Pooh…what’s it to ya?) and that this whole thing sucked and that I didn’t want to do this and that it was just too much for me to handle and what were we thinking. The tears flowed. I felt totally vulnerable. It wasn’t fluffy and warm and fuzzy. It was scary and it all reminded me too much of the last little boy who took me on a roller coaster ride.

The nurse let me calm down and then monitored little Nacho’s heart rate for a bit. She told me she was sorry she had to do that but that she was sure I’d progress from there. She left us to calm down and take short cat naps. Jason babbled something about how we could have slept at home for so many more hours…I ignored him but gave him a good slap upside the head in my mind. Then forgave him quickly…because I’m just that kinda girl.

The nurse came in about half an hour later…

But there was still talk of sending me home. WHAT THE FREAK?!?!

My contractions had slowed to between 3 and 4 minutes. I wasn’t too excited about the idea that I could possibly still be sent home…and then I had my first visitor.

Dr. V, the third party doc that delivered Noah, walked into the room. She had her scrubs on, but not to see me. She said she had just gotten to the floor and saw my name on the board. She said that there are some names that just stick with you. She didn’t know that Noah had passed away until she came on the floor that day 4 years later…she came in to say hello and to wish me luck. I was blown away. I reminded her of the party we had in the delivery room with all my girlfriends while Noah was born because I couldn’t believe she really remembered me. She assured me she did. Who knew after all these years we’d left an impression?!

Back to the story. My nurse came in and checked me.

She had been monitoring Nacho’s heart rate and though it was recovering, she still didn’t like that during each contraction his heart rate would dip slightly…so she went to make a call…

…and Mr. Favorite Doctor strolled into the room, all smiles, dressed in his shorts and a Polo on that lovely Saturday morning. He said, “Let’s get this show on the road and have a baby today.”

I choked back the tears that he wanted to help us have a baby on his day off. But, I didn’t send him back home 🙂

He broke my water and ordered Pitocin.

And, like each of my other kids, baby Nacho had stooled in utero so the ICU nurses were alerted that their presence would be necessary at delivery.

Freaking Great! Kid, you’re killing me! The last people I want to see in your delivery room are a bunch of ICU people! Can’t you just pop out and cut me some slack?!
Well, as I said, I was a bit emotional. I informed the nurse I was not planning on feeling any pain during this delivery so to make sure the anesthesiologist knew his services were wanted as soon as possible. I had gone to a 7.5 with Noah before I thought I’d pass out and finally ordered an epidural, but honestly, I just could not do it this time. I was tired before I ever skipped a full night of sleep, not just due to lack of sleep but the emotional roller coaster I had been on.

Anyway, my nurse started the Pitocin and was tracking my contractions alongside a girl’s in another room. Mine weren’t off the charts, but I could feel them and they were spreading out a little more. The doc came in to give me my epidural. I was ready to relax and calm down for a bit.

My little sister, due within a week of me (but also given the same due date on one occasion…) came over and painted my toenails. She went home and said she’d stop by later with the fam.

Jason’s sister stopped by after class around 2:30 or so to say hi. Then Em and Gina came by to hang out for a little while.

Em brought me my Pooh Bear. I hadn’t even asked her to!

I was at a “Four” so Jason informed them that it would be a while…if they had errands to do or anything else, to go ahead and come back later. So they all headed out for a bit.

Mr. Favorite Doctor kept calling the nurse and telling her to up my Pitocin because my contractions weren’t that intense…so she obliged and kept cranking up the numbers. They still weren’t as intense as the girl’s in the other room whose peaks were really big compared to my mild ones…but I was starting to feel them.

In fact, I told the nurse I wanted my money back on the epidural because even though from the waist down I was pretty comfortable, there was this Nalgene bottle sized space in the core of me where I could feel intense pain when contractions came on…and I mean intense!

She called the anesthesiologist and then checked me again.

The drug doc got there just in time to give me a little something to take off the edge.

I kept asking if he was okay. Mr. Favorite Doctor gave him a good flip-de-do, sucked out his mouth, massaged his belly a second and Ryan started wailing.

He was different than his brother from the very beginning. I needed that.

Mr. Favorite Doctor put him right on my chest and Jason prayed over him.

Em came back shortly after he was born. We had promised her she’d be the first after us to hold her very own baby brother. She loved him right away. I suspect he loved her, too.

So, that’s it. That’s the story. Except apparently there was a twist…

On Monday after Mr. Favorite Doctor did Ryan’s circumcision (which Jason and I both attended) he came to my room to chat and to write up my discharge papers.

He said, “You know, you had natural childbirth after all.”

I said, “No I didn’t. I was on Pitocin and had an epidural. Not really natural but I wasn’t going for that this time.”

He said, “Actually, remember when I kept having the nurse up your Pitocin because your contractions weren’t that strong? Well apparently the Pitocin was dripping on the floor, not dripping into you. So, you had natural contractions…you were in labor on your own.”

And there you have it. What I thought was a small puddle on the floor left by my 15 month old nephew when he had come to visit was really a puddle of Pitocin.

And, one of these days when I have some time, I’ll tell you how we picked his name. 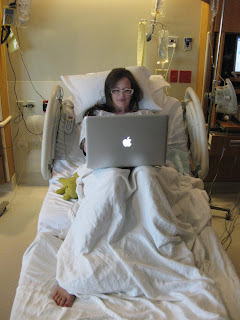 Me and Pooh posting my gratitude for epidurals on Facebook… 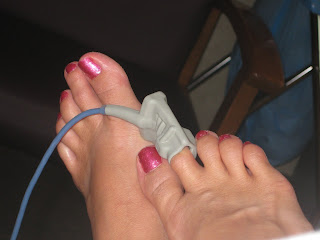 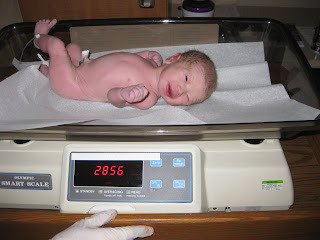 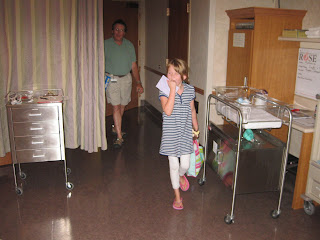 Big sis running in to meet Ryan Everett Graves, with Mr. Favorite Doctor, our Knight in shining armor, behind her.