My show and tell 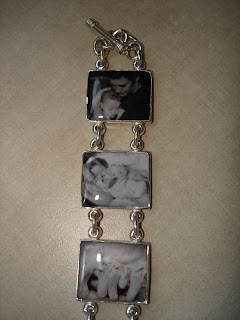 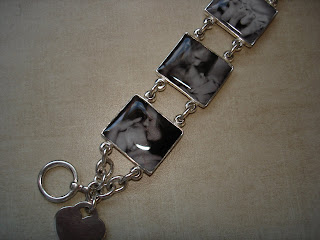 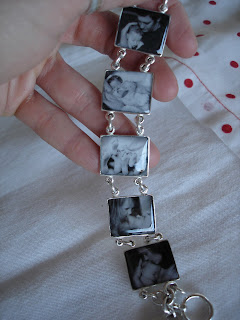 For my birthday in January Jason and Em wrote me a letter from Noah that said I got to pick out a special bracelet with his name on it. I searched but could not find anything that would do justice to the imprint Noah left on my heart. I am a very visual person, so I did a search on line for “sterling photo jewelry” and a site came up that is right here in the greater Denver area. It’s called Kimbra Studios. Here’s the link: http://www.kimbrastudios.com/ Being technically challenged, I couldn’t just send the pictures I wanted via email. Em and I drove over to the store, with my computer in hand, and worked with the ladies to make the amazing bracelet you see above in the pictures. It is even waterproof, though there’s no way that will be on while I swim! Anyway, I just wanted to share my show and tell. The bracelet has already started conversations where God’s name was glorified and Noah’s story shared.
The bracelet was completed two days before I left for Mexico. I was very grateful because I had been experiencing a time in my grief that I did not enjoy or treasure at all. For over a month Noah hadn’t even seemed like a memory. The thought of him wasn’t real anymore. I know that sounds strange, but I kept asking God if he really had existed in our lives. The memories of life physically with Noah seemed as if they were trapped in time and I hated each day that felt that way.
My breaking point came the first day we were laying on the beach in Punta de Mita. I had my Zune and was listening to ‘Third Day’s’ song ‘Offering’. My ears were pooling salt water but it wasn’t from the ocean! I was mad that God hadn’t taken me up on my offer of taking me instead of Noah. I was jealous that He was hanging out with our kid and not me! Thoughts of how noble it is that I wanted God to take me instead of Noah flooded my mind…how a child should never be buried by a parent but a child should always outlast their parent on earth…how sweet and beautiful and yummy my boy was…if I could just have a few more minutes with him…
And then the thought hit me like a whale jumping out of the ocean…It wasn’t noble of me to want God to take me instead of Noah…it was selfish. Now don’t get offended! I don’t know of any parent who wouldn’t die for their child. That is the part about parenting that is mind boggling! One day you are walking along, pregnant with a total stranger in your belly or anticipating the arrival of your very own adoptive child. You literally know your next door neighbor or the teller at the bank better than your own offspring. And then, WHAMMO! Suddenly you are in love with your kid, this little crinkly creature that poops and cries, and you know even though God says, “Do not kill”, that you might consider disobeying this particular commandment, just this once…and every other opportunity that arises thereafter.
No. It’s the heaven part I’m talking about here. As I laid on the beach, sobbing and missing my guy, listening to this song about offering our lives to the Lord, God showed me that it wasn’t that He didn’t want me, that I wasn’t a good enough offering, but that His timing has more to do with life here on earth than my 10% can comprehend. By His grace, He also allowed me to see that when I continue to change my perspective to think outside the box, wanting Noah to out live me here on earth is good and noble and genuine and everything, but death in Christ is not death at all, but eternal life, and that Noah truly is living abundantly. It doesn’t make me miss him less, but it’s the peace that guards my heart from the enemies attempts on it.
I used to fear death. I used to think that it was the worst thing that could ever happen…then Jesus Christ’s death on the cross and resurrection from the grave became a reality in my life and set my heart free.