(*This post is an unabridged version of a comment I left on someone’s repost of some guy on Facebook, a selfie of a 50-year old male caucasian US citizen of Slovak decent with a nice SUV in the background in front of a Walmart, ranting about what he assumes is an illegal alien or recent Mexican immigrant using an EBT card, driving said SUV, and he’s been working 7-day weeks his whole life and is in debt and why doesn’t he get an EBT card?)

I was just pondering this the other day how we compare what we see on the outside when we don’t have a clue of what’s on the inside, the deeper story of EVERYONE AND ANYONE. I was thinking about how some people say they’re successful financially because they work hard, however, my husband works just as hard at his job in the non-profit world as the immigrant farmer in southern California who is farming the organic veggies for the hipster artists in popular cities who work the same amount of hours but their work looks differently from the person who’s working just as diligently in a high pressure factory job or a white collar profession, the same amount of hours, different amounts of dollars. The truth is if the guy whose 50 year struggle still has him in heap of debt is complaining about immigrants being better off than he is, I wonder if it’s more a question of the way he stewards his money (and maybe his attitude?) and whether he lives within his means (see Dave Ramsey). Because some people around the world live on a fraction of what the average US citizen (or other first world citizen) makes in a year and are not indebted to “the man.” As are some US citizens living on way less than the next door neighbor, working just as many hours, but they live within their means.

I had a friend who was judging another friend because she spent $150 on a pair of jeans and my other friend would pride herself on buying five or 10 pairs of jeans at the thrift store at a fraction of the cost, thus saving all the little children of the world. My question to her was what makes her financial choice better than the friend who has one or two pairs of expensive jeans and is less of a hoarder than my friend who has 10 pairs of jeans of which she only wears one or two pairs but is just jazzed she got a deal? Isn’t it more a question of the heart? Isn’t it really about jealousy? Is it about justice? Is it a question about what is fair and what isn’t?

This problem of casting blame and pointing fingers and assuming we know anything about anyone else in their deepest stories, and their soul cries to God, this all started thousands of years ago in the garden and God warned us that we would surely die if we ate from the tree because, essentially, we would believe that we not only knew the difference between good and evil, but we’re capable of wielding that knowledge out at one another. Therefore, I submit we have lived out the rest of history pointing fingers, staring darts, casting blame, and aiming arrows and weapons, at the very ones God has created in His image, that is, namely, each and every single one of us.

These are some thoughts that have been swirling around in my head over the last several years and especially in this heated political year in the USA and in our very broken world. My husband and I are trying to teach our children to put themselves in the shoes of others. To learn the definition and lifestyle of empathy, practicing and being aware of how the plight, or celebration, of others might make them feel…teaching them essential tools and questions to learn the stories of the people they meet rather than assume. People who are just meeting me or my husband could not know we had a son who died or that we’ve both lost parents too young or that we were a day away from bankruptcy or that we’ve had marital struggles along with our victories or that I’ve battled disordered eating and skewed body image, and waves of insecurity most of my life. Unless they ask, of course, or unless I share my story, which I openly will.

My heart as a peacemaker is to hear and learn and understand stories before anything else. This is why the work of Brandon Stanton of HONY is so powerful…he is pausing to see every person, regardless of appearances. To truly see and to listen. And why does that matter? Well, the Book of Revelation says, “they overcame him by the blood of the lamb and the word of their testimonies.” Jesus did the blood of the lamb part. The word “story” is simply the modern-day buzzword for testimony and when we share our stories, something powerful happens in the spiritual realm, where a battle is raging, where we are unaware of all the goings on. And whether people know what the effects are of them sharing their story isn’t necessarily the point, but God sees the bigger picture and is glorified no matter what.

I appreciate what (your friend) Mary suggests, “that things aren’t always as they appear to be.” (She suggested she could have been a nanny using her boss’s car, using her own EBT card…) We just don’t know. I was a nanny driving a rich woman’s car right out of college and writing out her checks…no one posted a selfie and a rant because, why? I’m white?

This nation, starting with ME, needs to repent of pride and ego and judgment and assumption and entitlement. I can’t repent for the color of my skin, for the amount of money in my bank account, for my DNA or my ethnically-caucasian diverse background. But I can absolutely take responsibility for casting stones, for seeing specs of dust in the eyes of others when I have logs in my own, for thinking things are one way when they are really quite another. 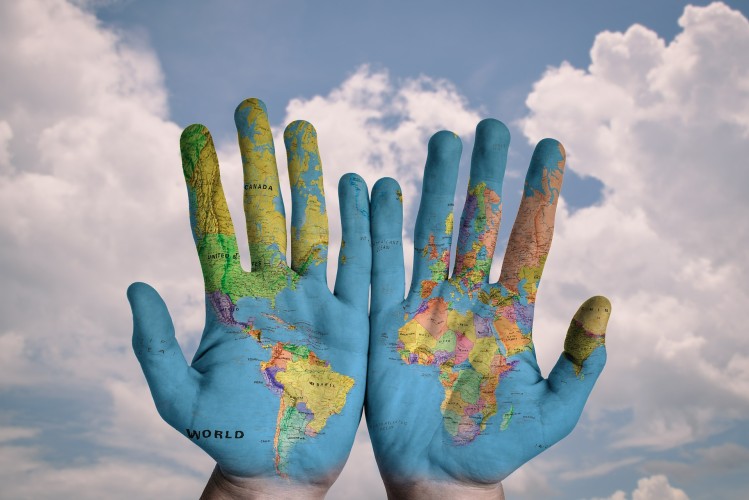 God created the whole wide world, ALL OF US, NOT JUST THE CITIZENS OF THE UNITED STATES OF AMERICA. When did governing our nation become a contest with the rest of the world on who is the best country rather than loving for the good of all people? It grieves me that some people long to, or have to, leave their country to come to America rather than being able to stay in the home land where they were born and have roots. This country was born because of that very thing. It grieves me to watch the babies washing up on the beaches because I know from experience what it feels like to hold a lifeless child in my arms and to feel helpless. Thank God I don’t know what it’s like to feel hopeless because I’ve been driven from my home or bullying and tormented by unfair governing systems. I have traveled all over the globe…they are all great countries filled with beautiful broken people all on the same journey of life. We all have this in common, we are all born and we all die, the rich, the poor, the red, yellow, black, white, pink, brown.

Each of us needs God’s grace in order to even BREATHE.

No really, each human being needs God’s grace in order to even breathe. The kind of grace that God extends to mankind was shown in the person of Jesus Christ who modeled for us how to extend grace to one another, “treat others the way you want to be treated,” rather than judging and drawing self-righteous conclusions.

There are initiatives in schools all over our country to stop bullying among children and I believe these are very important. However, children learn from what is modeled before them and that mainly from the adults in their lives. From all of the banter and the hurt and the pain we see in this world, I think the bullying dwells among the adults, adults who did not forgive quickly as children when children naïvely hurt one another, and it is for this very reason that Jesus told us to be more like children… To say you’re sorry quickly, to forgive quickly, and to get on with living and loving, to laugh and go play together. His was a reverse kingdom: treat others the way you want to be treated, pray for your enemies, give a cup of cold water to your enemy, if you want to be rich give everything away, if you want to live you must give up your life.

Lord, I repent of buying into a national dream and allowing my head and heart to be turned aside to the distractions of it all. Thank You, Lord, that Your Spirit in me/us is bigger and is gracious enough to hold my chin gently and my eyes upward to know You are GOOD and Your message has always been and remains to be, EXTRAVAGANT LOVE & EXTRAVAGANT GRACE.

Lord, I stand up not only for my own story but for all of the unspoken stories because in sharing them the real Enemy is overcome, light shines in the darkness, and each of us lets Your light shine through us, whether we know it or not. This is why our stories matter. This is why Jesus came and sat down at tables with people.

Only You see the soul, the very core of our hearts. You know us on the inside, we judge and kill one another by our appearances, our exteriors, our assumed personas. Of course You see color and ethnicity. You designed the rainbow. You are a creative God who has made billions of people over the ages in Your image. And You delight in the creativity and the expression of color and size and shape and gifts and strengths as revelation of Your hand at work among us. All of it, all of us, can give glory to Your goodness just as the rocks cry out and creation shows Your wonder! They all play a role and they all are part of a bigger more beautiful picture. But none of these things define us.

Some fight for color blindness. Some fight to see color. Some fight for their political side and others fight for the religious branding of their “free” denomination. At the very core of me with every fiber of who I am, I long that each one of us would see our souls, imago dei, as if we were physically blind but encountering one another heart-to-heart, just as in the book of John, chapter 1, where You talk about our true selves, our child of God selves.

May I be found extending Your extravagant love and bridges of peace wherever You lead me Lord. Even if it isn’t popular…