One might think all the planning which may go into a two week, second honeymoon, 20th wedding anniversary vacation would solely entail where to eat, play, and relax.  And truly, one would be correct in such thinking.  Sure, “What should I wear?” directed some of the planning, a little more than necessary and looking back I would have taken the smaller suitcase, but, I didn’t, and thus had plenty to wear.  But as far as the eating, playing, and relaxing, Trip Advisor was our BFF, as well as just wandering the streets, figuring it out on our own.

But now that I’ve gone to Spain, played hard for 2 weeks, which I liken to the Israelites feasting and celebrating certain ceremonies, then needing to get back to life and reality, pulling in the belt a bit, there are many lessons I learned looking back on our time.  All this to say, I never really expected our time in Spain, our getaway, our escape from reality and celebration of friendship and true love, to teach me anything.

Who knew it would be educational?

And it would be tragic if I did not share these lessons with you, whomever may care to read, especially because I had intended to blog from Spain but never did, though in my head I blogged quite a bit, and so, whether you read and learn and take away nuggets or not, I must write these here for myself to look at again and remind myself of what living a life of intention looks like, 8 hours east of here on another continent.

This lesson of freedom will likely turn into many posts as the Spaniards are a free-spirited people.  It’s a theme which carries into much of life, however, keep in mind, my perspective is only from a woman on vacation free from all responsibilities at home, so you must read through my rose-tinted glasses.

We arrived in Barcelona at 7:30 am after a stellar layover in Toronto where my husband introduced me to the schmancy United Club.  SAHM had never been in a United Club, eh-ver.

Back up a sec.  As I entered the plane to Barceleona, I was SO excited, likely from sleep deprivation since we left Denver at the crack of dawn before Jesus and the sun rose…so, as I entered, I couldn’t contain myself and I squealed to the flight attendant, “WE’RE GOING TO SPAIN!!!!  It’s our 20th wedding anniversary and we’re going to Spain!  I can’t believe it!”  (Clearly at this moment I didn’t care if she thought I was a freak!  Remember, I’m a SAHM and don’t get to Spain often…)  3 minutes later after finding our seats (thankfully in a 2-3-2 plane, we were in a 2 situation…), two glasses of champagne showed up.

Back to the United Club:  for those of you who do not know, it’s all you can eat hummus and veggies and all the Bailey’s your coffee can hold…all. day. long.  Plus free wi-fi and free, FREE, totally gratis magazines.  Like, good ones.  Some were in French so I didn’t read those, and one said something on the cover about watching for 5 up and coming Canadian writers, so I flipped through the pages fully expecting to see Sarah Bessey and Emily Wierenga’s names, but they were referencing five other Canadians 😉  All I know is, as I chowed on tons of veggies, hummus, and pesto, all the while Facetiming my kids, I wasn’t sure how our trip could get better.  *Wink, wink…hello, let’s not forget the destination…

SAHM needs to get out more, is all I gotta say…

The short train trip from the airport into the heart of Barcelona was lined with purple Morning Glories. Seriously?  Just growing, wild and free, as if they were weeds or something?  I purposefully bought Morning Glory seeds and planted them in my yard and smile their way as they greet me each morning, and here they are, just growing, literally everywhere.  Good start, Barcelona, you’re beautiful!

A two-block walk from the train stop and we walked into the lobby of our hotel where we were greeted by 2 of the nicest guys in Espana.  Jason asked if they had a room with a king-sized bed.  I could see the guys squirm a little, exchanging side glances as they told us they had already upgraded us to a certain room.  I gave him a little knowing look and toe kick and we received the keys and headed upstairs…

…to the nicest room in the hotel.  They learned it was our 20th and gave us the only room in the place with a rooftop terrace, plus a bottle of Cava and uh. maze. ing. dark chocolate truffles, to boot! 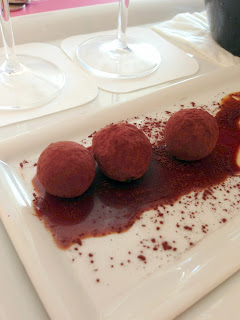 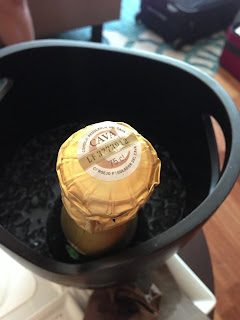 Dark truffles for my first breakfast in Espana?  Si, gracias!

(*We didn’t drink the Cava for breakfast, hello…so when we got back from hours of exploring they had left a note which said it was a free gift from them and “Happy Anniversary”, thinking we didn’t think it was free, though we did…anyway, along with another row of chocolates!  Love these guys!  Viva Barcelona!)

So, anyway, since this is long, and since you couldn’t see it all on the screen at once, you have already moved on.  In that case, the lesson here is:  Don’t be afraid to tell people why you are celebrating life, not because you may get a free upgrade, but because…

…life is a celebration and other people enjoy celebrating with you!

More lessons to come.  Heck, this post only lets off at 10:30 on the first morning…

One thought on “Lessons from Spain: Life is a Celebration”