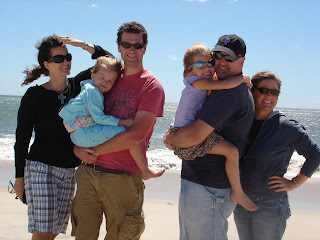 Blog worlds collide, but in a good way… 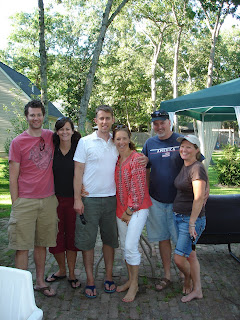 Dinner with old friends and new. 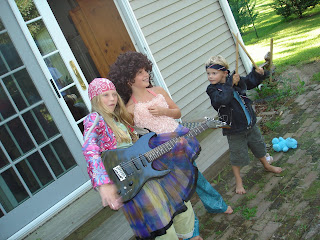 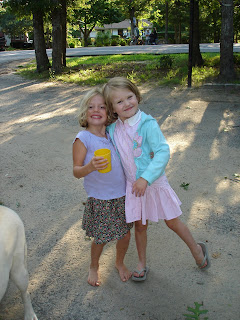 They look like old friends, don’t they?
Well, whirlwind would be one word to describe the previous week. We hit NY, CT, RI and NY in 5 1/8 days. We had some God-orchestrated encounters, and even now thinking of the timing of one of them, I’m in awe…My friend Clara, who was my neighbor in Denver, moved to CT a few years back to build relationships with her family. Just 3 weeks ago she moved to CA for a job opportunity that God opened up to her. Meanwhile, over the past year+, Clara’s older brother was battling brain cancer. She had just flown from CT to CA after visiting her brother the day Em and I were hanging in the Denver airport. She called me to tell me she was catching another plane to go back to CT because her brother wasn’t doing well. Em and I landed in NY at 9ish and were going to head up toward RI with Jason that night but we were all too tired, so we found a hotel in Stamford. Clara called me the next morning to let me know that she arrived at her brother’s 10 minutes after he went to be with Jesus…She said, “Em and I have something in common now…both of us have brothers in heaven.” If Em and I had been on time for our original flight, we wouldn’t have been able to give Clara a hug! Thanks, God!
We were able to connect the next day in a small town near her brother’s home for a cup of soup, a bowl of tears and hugs all around. This ‘happened’ to be a town that the Amtrak went through, so Em and I caught the train to my sister’s town in RI from there so Jason could head to his meeting.
Em loved the train. The conductor came to stamp our tickets and I informed him that this was Em’s first train ride. He took her ticket and punched out the letters of her name. Her face lit up and she looked at me and said, “I must be very special!” (Uh, yeah!)
We picked blueberries, made sandcastles, toured the cute ocean side towns and villages, explored the Girl Scout camp where my sister’s husband is the caretaker, roasted marshmallows, listened to Uncle Dan play the piano, went fishing, ate clam cakes (not a big fan…), saw big fishing boats, tried to clam dig, and finished the visit off with a tour of the Pequot Museum where I could spend several more hours learning more American history! Amazing!
Then, we set off to meet “Karen Kool” and family. Karen and I have emailed throughout our time with Noah. She found out about Noah through mutual friends (we all attended ORU and were involved with Teen Mania Ministries…). Anyway, she’s just as spontaneous as me, and thankfully so is my family, so we hopped on the ferry from CT to NY and drove down to the Hampton’s to meet Terry and Karen and their six beautiful kids (and their white lab named ‘Noah’). (By the way, another non-coincidental encounter…on the ferry we were going to sit outside upstairs but it began to rain. We headed downstairs indoors and I sat next to a girl who is a resident medical student at Harvard Med School studying to be a…pediatric neurologist. Noah’s neurologist just moved from Denver to Harvard this summer, so they WILL meet. Oh yeah, and she’s from Thief River Falls, MN, which isn’t very far from where Jason grew up in South Dakota…and, she lost her little brother several years back. So, I guess we were supposed to be on the 5:30 ferry to Orient Pt!)
Back to blog worlds colliding…Not only did we meet them, we stayed there, too! Now that’s hospitable! Karen is real, just like her blog. I couldn’t love her more! It was like two new old friends who got to hang out briefly. You can tell by her family she loves them well…And, the next day after a driving tour, we were able to connect with old friends from college/Teen Mania that I hadn’t probably seen in 10 years. They live out there in the summer, so it was neat to reconnect with them and meet their little boys.
I tell ya, it’s good to be home, but not to settle into the comfort of monotonous boredom! To an extent, for my personality (flow, fly by the seat of my pants…) routine is good, but I’m looking forward to more God-orchestrated meetings in my agenda! I like variety!