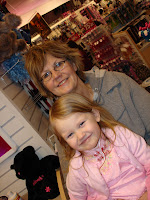 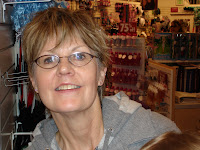 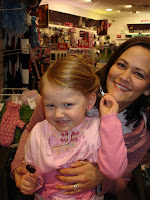 So, we did it…we marked our bodies to remind ourselves to pray for Noah. I had thought of waiting until Emily was 10 to get her ears pierced since that’s how old I was, but I copied my friend who had her daughter’s ears pierced to always remember her little sister Pearl who resides in heaven. Today was Noah’s 5 month marker for being here and I wanted to commemorate it. Em, her Nana, her Auntie T and I went to the mall and all invested in some new earrings. Tonja bought some “diamonds” to match Em’s, but the rest of us girls got pierced. Kaija was bold and went first, at the direction of Em. I’m sure her friends in Watertown are freaking out about now. She was very brave and looks quite beautiful with the new addition..Then Emily appointed me, but I hadn’t decided where, whether it was going to be a conservative choice on my part, meaning a second hole in my right ear to match the left after 16 years (split the cost my freshman year with my friend Stephanie b/c we were poor…), or through the cartilage on my upper left ear…I chose the left. Everyone said how much the cartilage hurts, but since it’s for Noah, I know it’s nothing compared to the pokes and owwies he’s had… Then it was Em’s turn. She decided against it, though need I remind you she bravely sat through staples in her head? Also keep in mind she hasn’t stopped talking about it since I shared the crazy idea with her a week ago. Then she decided for it. Anyway, the girl marked her ears with the marker and had another girl come help so they did it simultaneously. Great in theory…By the time we got in the car and then home and had a really good look, Em’s left earring was way off in Egypt, NOWHERE NEAR THE MARKER POLKA DOT, while the right was front and center. Jason called the shop and they said remove it right away and come back after 24 hrs for another go around. Removal was a HUGE ordeal! Em was bawling because she thought it would hurt. She wanted me to do it, then she wanted dad, then she wanted to leave it crooked…at one point, Jason came up from the basement with pliers in hand for the removal, like a scene from a sci-fi thriller! Finally, wedged between the two of us on the very stairs where staples came into the picture, Jason got the earring out, with his hands and all was calm…I wanted this to be a positive experience for my peanut, I even had offered and applied and removed lidocaine courtesy of TCH Denver, but she didn’t want it. Well, now my kid’s going in for a second piercing. Emily is excited because every time she twists her earrings, she’s going to pray for Noah. Though a botched job, it still accomplished what we intended…to think about Noah.

So, speaking of which, some small milestones have been made recently, like yesterday and today, by Noah… He has been stooling more and more on his own. This is a huge accomplishment. Then, he has regained his gag reflex which was gone for over a month and a half…WHY? Ask God! Give Him the Glory! He also continues facial grimaces which some of the nurses had never seen. And, my favorite…the tickles I told you about already…well, they continue and it’s just about as cute as can be! Tomorrow we’re starting Noah on a rice based food supplement that helps support digestion and decrease inflammation in the body. We had to wait a week to get this ball rolling because conventional Western medicine/dietitians don’t use this product and are unfamiliar with it…gee, that’s because for the most part, NOT ALL, they follow the FDA food guidelines and pyramid for direction on how to eat. If you look at the back of most vitamins or supplements at a health food store, it may not be “approved” by the FDA, but the entire natural medicine world has existed on these for years! Hello…if the food pyramid is so great, why is America in such a morbid state of health? Don’t get me started…Thankfully this month’s resident is a vegetarian from Berkley, so he’s all over getting Noah on healthy supplements that aren’t man made.

Okay, so this is extremely long…but I was praying through a lot of the prayer concerns from the fall and want to throw that out there again. I’d like to dedicate a lot of time of prayer in the next few days for whoever wants/needs it, so PLEASE email us so we can be in prayer for all of you as a family. Also, if you happen to read the comment of the person ahead of you, will you please pray for them as well?

Note to self for later post: peanuts and diamonds…