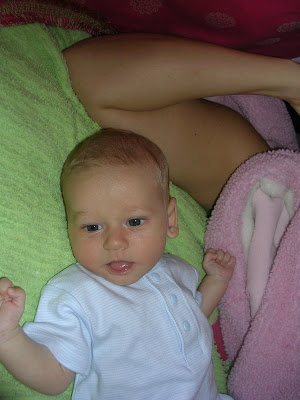 Em took this picture of Noah the end of July. I just found it on her digital. This was one week before Noah got checked into the hospital, 5 months ago tomorrow. Jason and I were talking last night about how crazy it is that it’s been almost a half a year since we checked in…My life has become richer and much poorer during that time. It’s become deeper and emptier. I feel like a living oxymoron.

Today I came over to the hospital, had the nurse help get Noah into my arms, put a sign on the door that said, “Do not disturb until 5pm” and snuggled my guy for 3 hours straight…no interruptions. No doctors telling me nothing, no drugs to administer, no RT treatments…just me, Noah and God, and we had words…The nurse graciously cleaned up my missed tissue three point shots that fell short all over the floor. She said that’s what gloves are for…she told me life is like a marathon, none of us are wrong, we are all at different places, some out front, some in the middle, some walking here and there. I told her I’d rather hand out water to the people in the race, since I’m not a big runner…the problem with this marathon we are running is that there is no goal in our future, not for how we care for or treat Noah. I think this marathon stinks! I know the life marathon goal is to tell the world of the Lord’s glorious return, of that, I have no qualms or confusion, but this…like I said, I’d rather pass out water and cheer on the runners by.

I’m not sure why we were chosen to have the most precious little boy we could have ever imagined, but I’m grateful we were and I wouldn’t change him coming into our lives for the world. I’d change his state of health, obviously, but if I got pregnant tomorrow and we had Noah all over again, same scene…bring it on…we’ll remain faithful and we most certainly won’t shut up!