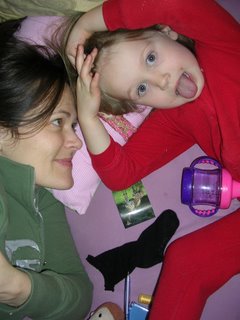 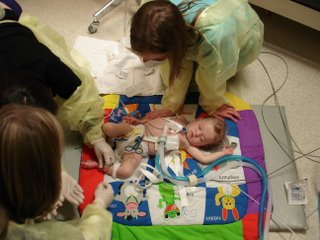 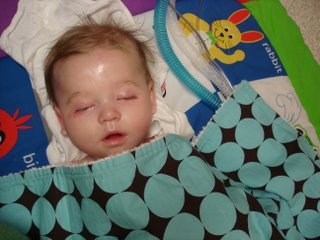 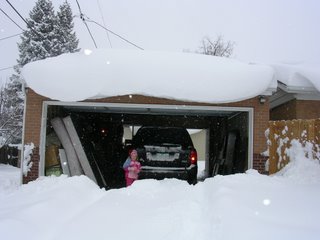 Em and I decided to brave the blizzard last night and drive home from the hospital. We did just fine until we hit the driveway and got stuck! I had to reverse it a few times and then we catapulted into the garage just shy of shooting through the back wall into the yard! Last night we built a fort in the basement (the first picture) and told stories. Today we bundled up and tackled the driveway so we could at least back out to the street so we could go see the boys at the hospital. When snow is thigh high, it’s not the time to start “working out”.

Anyway, the other two pictures are of Noah having floor time. The nurses were trying to fix his dressing on his PICC line tonight, so that’s why they are all sitting around him while he’s on the floor. We had good snuggle time and I massaged his back and head for a while. And yes, people, his face is smooth and crust free, once again! I’m holding back on the smothering kisses so I’m not the culprit, but I am smooching his head and knees and elbows and toes, just shying away from the cheeks…I just can’t get enough!!!

So, this is what I’ve been thinking lately…
A LONG time ago, I think I was in junior high, I wanted to be a doctor for two reasons: I wanted a Mercedes and I wanted to heal people. I am over wanting a Mercedes, though they are fine pieces of machinery, but I am NOT over wanting to heal people. Well, I decided to go pre-med in college, but my freshman year I failed chemistry. I did get an A in lab, which is something…anyway, I took it again to replace the F and got a D! Hello, God, how am I supposed to be a doctor if I can’t even pass chemistry??!! He answered quite loudly with a, “You don’t have to be a doctor to heal people. You can pray for them.” Okay! Nice! I quickly withdrew from biology, too! I changed my major to theology with a missions emphasis and minored in Spanish. I wanted to study something I was good at, and to me, that meant studying people and cultures and God’s word. From that time on, the desire to see people healed has never left my heart. Side note, Jason’s name means “healer”. He has always wanted to be rich, not so we could have “stuff” but so we could GO wherever God said GO. My name means “rich”. Anyway, all of this to say…Jason and I have gone overseas a lot. We’ve always had a heart for missions. We’ve always known we’d travel as a family. Well, God gave us THIS family. We will not be separated. SOOO, we may not look like your conventional missionaries, but we will NOT let the devil get ANY part of the victory in this, so, if we have to get a jet with a medical team and oxygen tanks, by golly we’ll do it! NOTHING WILL HOLD US BACK FROM PROCLAIMING THAT JESUS IS IN LOVE WITH THE WHOLE WIDE WORLD AND THAT HE DIED ON THE CROSS AND DEFEATED DEATH, CARRIED OUR DISEASES AND GIVES EVERYONE WHO WOULD BELIEVE ETERNAL LIFE. So, I may sound crazy, but I’ve heard others have done crazier…Jesus left a really sweet pad to come here for a bunch of undeserving…now that’s WAY out there! Arthur Blessitt’s been flying around the world for years with brain aneurysms galore and he doesn’t even take a medical team! I’m not saying it’ll happen, but we are willing to GO wherever He says GO!