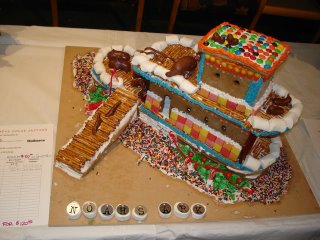 Do you think that when God created all the animals, He formed them out of warmed Tootsie Rolls? That would have been something to see, but I think the way He did it was probably WAY cooler…Anyway, here are the other two pictures that didn’t fit in the next post. I love this one of Em and Noah…she was SOOOO excited to get a little brother! She really is great with him! 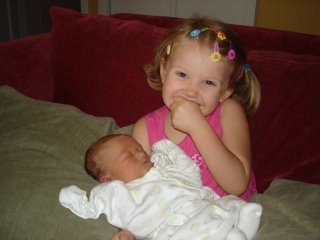 Today’s care conference was nothing different than the others in that it is already established that there is nothing that the hospital or the Mayo, as we found out today, can do for Noah. We weren’t there to really discuss that, but boy, from the one doc, was it ever re-emphasized, to which I replied, “We aren’t ready to say goodbye to Noah, so I want to be assured that he’s still being treated equally as a human being. I want to know he’s still getting optimal care and that he isn’t being treated like a lump!” We said we wanted OT and PT to continue coming for therapies, to which the one doc said, “Usually there needs to be a goal for therapists to treat. I don’t know if the insurance company will pay for those therapies if he’s going to die and there is no ‘goal'”. I said, “Our insurance hasn’t had any problem paying the $1+million that has accrued thus far…the goals of OT and PT are stimulation, that shouldn’t be a problem.” The ironic part of the meeting, to me, was that the doc that I didn’t expect to come was the one that spoke the most and drilled it home again and again the tragedy of the situation. Apparently that person doesn’t realize we realize what we realize…the annoying part is that doc keeps saying, “The sad part is we aren’t good enough for Noah.” Yes, that is the sad part and that is the reality, but I told them that we still have hope and we still have faith, unfortunately we are stuck at the hospital while we wait…”