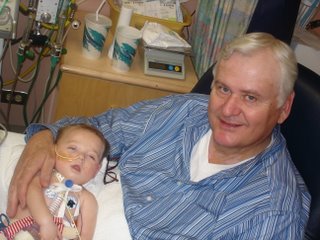 Yesterday my dad snuggled with Noah for quite some time until his knee cramped and fell asleep. My dad has pretty bad knees(docs want him to have them replaced)…it takes him 5-10 minutes to stand up after kneeling and praying for Noah…he has dropped to his knees many times for our little guy.

Anyway, Friday I was “show and tell” at Emily’s preschool. The teacher told them to bring in something for which they were thankful. I asked her what she was going to bring and she said, “YOU!” She wanted me. It took everything for me to choke back the tears when she said that since our time has been so limited since Noah checked into room 306. The sincerity of a child is priceless. I know this because she wanted me even though I literally hadn’t showered since Tuesday.

Preschool was enlightening…the 3’s & 4’s combined for a hand washing demo from the school nurse. Seriously, I am already a germaphobe from living here for 3.5 months, but now…so, the nurse gave all of us this lotion that shows germs under black light. You should have seen all the white masses of germs on hands, fingernails, and creeping up sleeves! Then we all went to the bathroom after being educated on proper scrubbing and everyone tenaciously washed. We returned to the black light where most kids had done 50/50 jobs of removing crud, but HOLY SMOKES, seriously, everyone should adhere to the sick kid policy, that’s all I have to say about that! p.s. my hands were nice and clean!

“All this is for your benefit, so that the grace that is reaching more and more people may cause thanksgiving to overflow to the glory of God.”
2 Cor 4:18 I share this because it’s been obvious in the past three months, but today, it was blatant! We were blessed with meeting a new friend who was here on business and felt compelled to come meet Noah. Upon meeting him and hearing his story, he felt strongly about going to our house. My parents were there and got to meet him. My dad and he had a good talk about their religious roots and as a result, they prayed right there in our family room. We praise God for this! I have to tell you what was going on only 5 miles away while this neat guy was giving his life to Christ…All day Noah’s heart rate had been creeping slowly upward. He began to feel warm and he was pretty white and having a bit more labored breathing. After our persistence, the docs ordered another blood analysis because I insisted that his hematocrit (blood count) was lower than they thought. Noah’s temp spiked to 103.8, his heart rate was sitting at 189bpm, and he looked pretty lousy. I called my mom who was at the house with my mother-in-love and asked them to start praying. They went in the back bedroom and started praying up a storm. Little did they know they weren’t only praying for Noah’s healing today but they were praying against a huge attack and scheme to keep this guy from realizing the amazing grace of God’s love. When my mom called to tell me that our new friend had left and that he had prayed with my dad, I told her that Noah’s heart rate was down to 159bpm, his temp was 100.2 and his color was coming back.

I’d say that the devil was really mad today, how about you?!?!