In preparation for my Mom’s memorial (funeral) service, I wrote out more than a dozen pieces, trying to figure out just what to say. Once it was determined I was the one who would be sharing the message, I prayed and pondered how to sum up 42 years of MY memories with a woman who lived 26 full years of life even before my arrival to this earth. My Dad said he wanted me to share but with one stipulation: I couldn’t say “pissed off”. I asked, “Where have you EVER heard me say that?” He informed me that it wasn’t only my Mom who had listened to my radio show several years ago, but he did, too, and he heard me say it. I assured him, “Dad, don’t worry…I won’t say ‘pissed off’ at Mom’s service…but I’ll probably drop an ‘eff’ bomb…” (*if you could only be a fly on the wall of our family’s inappropriate sense of humor…at all the inappropriate times…hey, laughter is good medicine.)

Except I didn’t drop an ‘eff bomb. The problem is, whenever I speak publicly, no matter how many hours of preparation and rehearsal are poured into it, I still get nervous out of the gates, then warm up after a few minutes. And my Dad said I couldn’t cuss, and it wasn’t a wedding where I had already had half a glass of wine to relax, so my usual alternative is a joke to lighten people up… (*Hello!? remember WHY people have asked me to speak publicly over the past 8 years…because my son died…and people always think it’s going to be sad, even though it’s not…I need a new platform…just sayin’…) But it was my Mom’s memorial service, so without cussing, wine, or a good joke, I awkwardly fumbled and barely scratched the surface to only ONE of the angles I wanted to go in sharing about my Mom and her impact on my life.

Then, of freaking course, I left my computer in the other room with all of my notes and ended up winging it…but whatever.

After I worked out my nervous kinks, I was so glad to be sharing at my Mom’s service. I’m very comfortable not only sharing my heart candidly but sharing about death. I think funerals, (and talking about dying and death) are kind of important, I mean, especially since everybody dies and all. Yet we avoid the topic like the plague, as if that keeps it at bay, and don’t even plan services until a person has died.

You see, I don’t think weddings and funerals are really all that different. In both cases we celebrate a sacred love shared between two key players. Weddings are a blissful time where there is all the time in the world, seemingly. Funeral are the bittersweet reminder that God holds the number of our days in His hands…life is short this side of eternity, living with intention is key, and that even though those of us left over will be sad, it’s momentary, and the gathering of people to celebrate the one who has died is truly an opportunity to share joy! And, baby, my Mom loved a good party, especially the pretty decorations! Music, stories, food, and tears are present in both scenarios…and if it’s a funeral, there is most certainly dancing going on, too, though we just aren’t able to see it.

Anyway…I can honestly say, I’m not sad for her. I don’t grieve without hope. There is a vast difference between grief and despair. Grief is a true emotion meant to be expressed over great loss, and for me, the loss of my Mom’s physical presence in my life is great because I loved her dearly and was loved unconditionally by her, but I’m not sitting in the corner of my closet, hopeless and in despair. I know it’ll hit me in the thighs in a few weeks when things “wind down”, I realize I can’t carb-load anymore, and the reality hits that she’s not on a trip with my Dad, out of cellular range, so that’s why she isn’t calling…believe me, I’ve already wanted to ask her something specific and the answer is gone, with her. 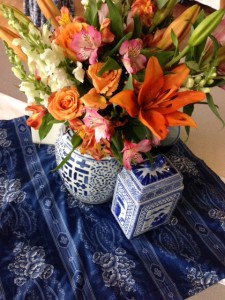 God gave me a vision of my Mom while she was alive but on her last full day of life, and this as I sat behind her ailing body, rubbing her back as she tried to breathe…she was sitting on the edge of something and had her head turned, looking back at me over her shoulder. She was alive and young and vibrant and her smile was one so wide and beaming, I had never seen one quite like it captured in any photograph. Her eyes were bright and so alive and the look on her face was that of anticipation and excitement for what was before her, more glory than she had ever known…and then she danced with all of her might, and I could no longer see her…

Because apparently dancing takes place not only at weddings, but also in the midst of sacred encounters…

3 thoughts on “On Weddings and Funerals”