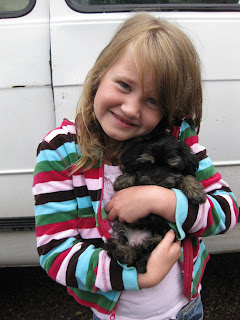 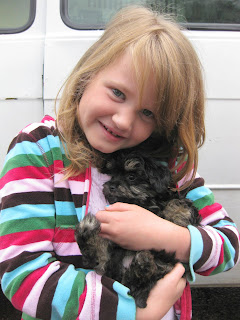 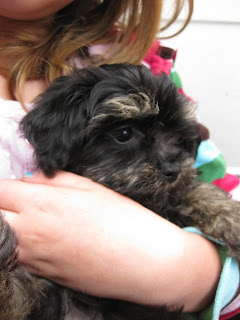 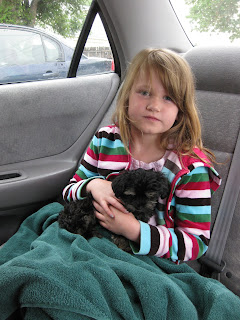 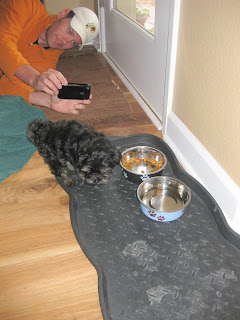 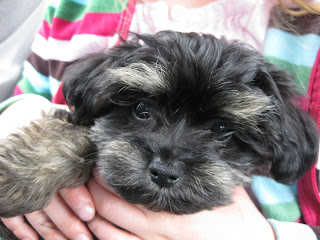 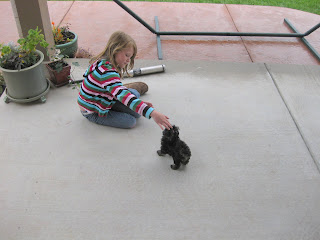 …and honestly, the list went on and on. Em just could not decide. Then, she had decided…or so she had thought. Her name would be “Tiger”, just for the irony of it…oh it’s ironic, alright! One, obviously Em’s dog didn’t resemble a tiger in a million years, and, secondly, what she didn’t know was that her puppy wasn’t a millionaire or and will be spayed one day!

Anyway! We met the breeder on Saturday morning to pick up Em’s Maltipoo mix, that is:

On Friday after school Em and I had done a little bargain shopping. She had gone to do a little research with her Auntie at a gourmet pet store, asked countless questions, written a list of “must haves” and informed me that the grand total for all things puppy added up to around $200…that was in addition to writing the check to the breeder. I told her that Mommy never buys things “Retail” so I was SURE we could find some great deals other places. She had her doubts until we walked out of Tuesday Morning with a doggy bed, leash, harness, collar, and food and water bowl all for under $30. My mom taught me how to bargain hunt…thanks, Mom!

Well, of course, I purchased said collar, harness and leash for a “small” breed pup, with the thought and working understanding that she’d reach approximately 10-12 lbs…

Side note: We got rid of our scale, one, because Jason stepped on the face the first day we bought it 7 years ago, and two, because I used to have a problem, an obsession, with weighing myself! After having a daughter I decided it was an unnecessary item to have in our home, not wanting to pass on that horrible habit of constantly weighing myself to my very sweet, beautiful daughter! I weigh in at the Ob/Gyn and at the gym whenever I remember…that’s another post, but all that to say, I’m not totally certain how much Em’s puppy weighs, but the scale in the produce section will MORE THAN SUFFICE!!!! I’m thinking, FOR SURE, no more than 2 lbs, presently!

Don’t worry…I’m not taking her grocery shopping! I’m not that girl…

Anyway, the breeder informed us that the little black and brown ball of fur would reach a whopping 5-6 lbs full size. Yep. Even smaller dog = even smaller poop.

I know we were all a bit shocked at her tininess. Is that a word? Anyway, in the car on the way home, after meeting her puppy for the first time, Em could not figure out what to call her because she didn’t feel “Tiger” was really fitting any longer.

So, for about 8 or 10 hours we called her “Baby”. Yes, it was my big mouth that suggested it…but, nobody backs Baby into a corner…no really, I mean, it wasn’t sitting right with me…BECAUSE WE’RE ALL HAVING A BABY IN AUGUST, A REAL LIVE HUMAN KIND, AND, well, I just wasn’t cool with the fact that it’ll get confusing. Not that we’ll walk around calling our human baby “Baby”, he’ll have a name, but still, confusion will result.

And, even though Jason and I really wanted to encourage Em to name her own puppy, we had to set up some parameters. Em understood and on Sunday she announced that her name was “Lady”.

For whatever reason, I woke up Sunday morning with an urge to call her “Suki”. Apparently it means “Love” in Japanese. It’s also a hippopotamus character in a Richard Scarry book…again with the irony.

But…Em’s at school for another week and a half…so, Suki and I are sitting here typing this blog post.