“A visible God would have lots of superficial followers.” Chris Tiegreen

Faith is hard. It’s hardcore and it’s uncomfortable! I mean, seriously, who wouldn’t follow God if, at the moment each of us died physically, our bodies either floated peacefully to Heaven or went straight to hell? It would be the easiest decision Eh-ver! Instead, at times we feel a need to defend God or His existence. And, at other times, we try to convince ourselves.

“Okay, God, I know You are real. Wanna just throw me a bone though, just to make sure I’m on the right track?” or “God, I don’t think You really exist. I think you are a figment of a bunch of whacko’s imaginations and I don’t want any part in it…” (Oh really, then why are you ‘thinking’ to God in your head? Just throwing that out there…)

Each and EVERY ONE of us has been hand crafted by the Creator of the Universe, God Himself. We weren’t manufactured in an abandoned/bankrupt automobile factory or even designed by a computer engineer. And technically speaking, even scientifically, we weren’t just instantly human. God literally made us from dirt! We were dirt! Without His life breathed into us, that is how we would have remained. Sometimes we still may feel like dirt, but we were loved enough to be so much more!

It takes something from us to actually have faith. It takes surrender, I am finding. It takes a willingness to admit I’m not the smartest person in the world. It takes effort on our parts to say we are wrong, that we don’t have all the answers, and maybe, just maybe, God, who we can’t see and who doesn’t work or do things the way we necessarily would, is good, loves us, and sees a bigger picture. And, in my opinion, by admitting that, you are more wise than all the philosophers and theologians and scholars in the the world…Because, of course, He’s smarter than them…

If He were on, say, American Idol, He may have likely had the best voice, but I’m thinking a lot of people would have voted Him off because He just doesn’t ‘have the look’, ‘fit the mold’, ‘have great stage presence’, according to OUR standards. Jesus didn’t do flashy miracles all the time and He didn’t fit into the mold of what the people were expecting. He definitely did miracles, but not for esteem or to draw attention to Himself, but to point people to His Father and to show His love. An ‘out of sight’ Dad, but not out of touch. Very much IN TOUCH, hence, sending Jesus and all!

Superficial means: of, relating to, or located near a surface; lying on, not penetrating below, or affecting only the surface; concerned only with the obvious or apparent; shallow; seen on the surface; external; presenting only an appearance without substance or significance

In order to know God, in order to have faith, in order to gain a perspective in life that is so much more than what we can tangibly see and feel, we have to dig deeper, get below the surface, because, really, God doesn’t show Himself physically a whole heck of a lot. We don’t dig deeper by setting up more rules on proper behavior and good works. We don’t dig deeper by doing everything right and always saying the right things. Actually, thank God that when He instructed us on what is required and how much faith it takes to follow Him, it was only the size of a mustard seed. Whew! I’ve got that! 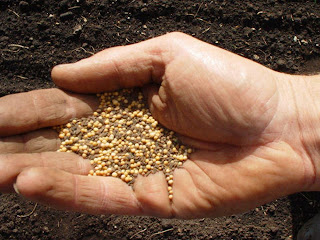 Now, I’m off to follow and trust and live for my unseen GOD! Deeply, truly, below the surface, where roots can spread and growth takes place…