This is a note to myself and to every. single. stay. at. home. mom. or. person. in. the. whole. entire. world.

Side note:  If you’ve ever done, or are interested in doing a Beth Moore study, don’t follow the rules.  Rules and schedules are suggestions and when it comes to one of her studies, one week per lesson or session, is insufficient time to truly dig in deep to the content in Scripture.  Her studies are merely springboards into God’s revelation.  Every time I’ve been part of a study, this time around specifically Daniel, we have broken the rules and lengthened the study for as long as it takes.  Let’s just say, we started this “12-week” study eight months ago…and we’re not done yet.  But this isn’t the point of this post, at all.

So, in Week 10 of the study, page 195, Beth says this, “Sometimes the complacency of ‘home’ is not conducive to the most life-altering revelations.”  To which I wrote in my margin, “Short-term missions are relat revelatory.”  Because I am very passionate about “missions” in general and how they can transform the heart of the go-er, no matter the length.  People need to cross borders…it allows our eyes to be opened.  However, that still isn’t the point of this post…(more on that another time…)

Then she said, “Have you ever noticed that some of the most life-altering moves God has made in our lives have come when we were away from our homey surroundings?”  And she goes on to say, “Often our most defining spiritual markers happen at conferences, retreats, on mission trips, vacations, or work stints far from home rather than in the usual places.”

Before reading the remainder of her thoughts, I had my own which I scribed in the margin, “I challenge that ‘home’ is the place where the rubber meets the road and our faith sets in and takes root…if we continue in our pursuit of Him in the mundane, He is there…He speaks.” 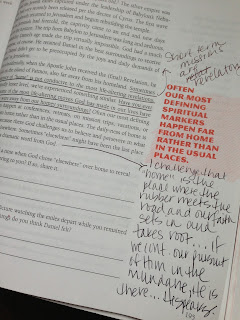 And then I continued to read, “The daily-ness of home is crucial, however, because there God challenges us to believe and persevere in what He often shows us elsewhere.”

But what if you are a “Stay At Home Mom” or SAHM or Person and never leave home?  What if your definition of leaving home entails carpooling, grocery runs, jaunts to the library, co-op, sports or music practice, doctor check-ups, and filling up with gas so you can repeat those things previously stated?

What then?  Is there no potential, then, for a “defining spiritual moment” to take place in the life of a SAHPerson?  Are Stay At Home People too mundane, too homey?  Do SAHP NOT change the world or NOT experience life-altering moves of God just because they didn’t go far from home?

I dare say that for the last 2 1/2 years I have purposely hibernated.  Being quite literal, I have stayed. at. home. And I’ve been INTENTIONAL in playing with my kids, dating my husband, spending time with my extended family, meeting more of the neighbors and the parents at my daughter’s school, but really, focusing on the circle of life I’m in at this particular stage of life and not going that far outside of it.

And during the last two and a half years, God’s shown up in powerful ways.  He has shown up in our times at the dining room table most mornings.  He has opened up conversations between people which have been shielded and closed for a long time.  In unsuspecting settings, He’s provided cool opportunities to pray right then and there with people.

And at home, He has taught me more and more about Himself and His incredible love for me and for ALL OF HIS CREATION, His longing to be in community with His people.

I haven’t been on a quote un quote missions trip in a few years now where I’ve left the country.  And believe me, I am very passionate about visiting Third-World countries.

However, don’t EVER let the Devil lie to you that you aren’t making an impact in your circle of life or changing the world around you, right here, right now!  The impact you make can either be beautiful and life-altering or spent wishing you were doing something else, living someone else’s life, waiting until you have “your act together.”

The reality is, if we look to God in the day to day, sharing His love with everyone we know and meet, don’t you think eventually those ripples will start overlapping?

*What are some ways you know God has shown up in your day to day mundane?  How has it changed your perspective?