You know, I was never a fan of funerals and potato salad or dying people or dead ones or death or pretty much anything that had to do with end of life.  As a kid, from grade 3 and then throughout junior high and high school, a friend, classmate, relative, or pet, died, each year.  Super fun, YEAH!

When I was really little, like preschool age, the guy across the street backed over his son.  My mom was gardening and heard him yelling at his big brother (only 4 at the time) that he was supposed to be watching his little brother.  Messed up…

After my friends and I walked home from the bus stop one day, about a half hour later I heard emergency sirens and a helicopter.  My friend, John, who Stacey and Marc and I were just walking with, was in that life chopper, hooked up to machines, on his way to his last breath.  I didn’t go to the funeral.

The first funeral I even remember was my own Grandpa’s.  Enough people had died in my life by then that to actually have to face it and attend a funeral, at age 16, made me nauseous.  I was FREAKED out!  Likely this was due to my own deceitfulness and sneaking I had done in junior high watching “R” Rated horror films while my parents were gone.

What the hell was I thinking?  You name it, my friends and I snuck and saw it.  Children of the Corn, Poltergeist, Nightmare on Elm Street, who knows what else…

Wow.  To think Hollywood makes money off glorifying death and dying and the underworld.  It’s the unknown that fascinates, but to horrify it?  Dear Lord.

And now I’ve tasted death.  In fact, not only have I soaked my dead son with my tears, but I’ve grieved with others who have done the same.

I’ve kissed death.  It’s bitter.  What if Eve had picked fruit from “The Tree of Life” instead of the tree of the “Knowledge and Evil?”  We never would have tasted the salty bitter emptiness that comes to those of us left this side of Heaven.  We never would have experienced separation from God…

This month my friend, Carly Marie Dudley in Australia, is hosting “Capture Your Grief” for Pregnancy and Infant Loss.  She’s created a Facebook page for people to share their stories according to the topic of the day.  I headed over there just to check it out.  You know, since it’s been 5+ years since I held Noah, I was just going over to the site to encourage others, probably new moms and losses.  And then I started reading, and just saying, “I’m so sorry for your loss!” and looking at the beautiful lives affected by death and temporary separation, yet heartache, nonetheless.

And then I posted a picture.  Because it was a call for “Pre-Loss” pictures.  And that was easy, because I posted this: 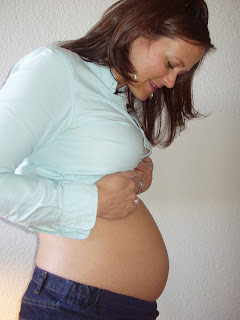 It’s a picture of Noah, in my belly, safe and sound.  And it’s utter pregnancy joy on my face, looking at myself for the first time in my life and thinking, “Wow!  I’m beautiful!”  And it’s a gift to my heart because I didn’t know.  All I knew was I would have a son, and I was already in love with him.

Being over at Carly’s Facebook page with all those stories is difficult.  It’s not cupcakes and tequila.  It wrecks me to know other families hearts will know the same pain mine has known.  I knew when Noah was sick, and after he died, that we weren’t the first and wouldn’t be the last.  But there’s still a hope and a wish it could have ended with *us*.

When I saw my Grandpa, lying there in his coffin, hands folded, handsome, eyes closed, with a little too much make up, a peace I had not yet known in my life swept over me.  I remember thinking, “Huh.  That’s not my Gramps.  That’s just his body.  He is with God.  He is at rest.”

Today the call on “Capture the Grief” was to post about a treasured item.

If you’ve read here long, you know I’m not attached to things.  Remember my purge fests?  Anyway, I realized, though, my most treasured item is my Bible.  It’s my most treasured item because, well, it’s my Bible.  Duh.  But, also because the night before we said goodbye to Noah, his nurses brought me ink sheets so we could stamp his feet.  I searched for a clean page in my (at the time) 20 year old Bible.  The only page I could find was opposite the last page. 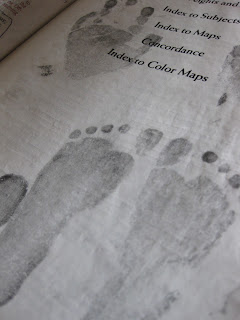 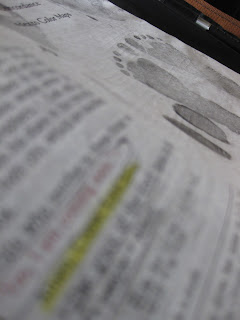 I treasure this for the promise that it is, as well…that life here on Earth is literally but a vapor!