Christmas morning I slipped out of bed quietly, which isn’t hard with Jason since he’s quite the sleeper, and tiptoed quietly to our bathroom to take the test that I knew in my heart would already be positive. I hadn’t decided if I would show Jason the stripes that day or wait until 12 weeks or what. I know that sounds crazy to wait that long to tell your own hubby…especially Jason who I tell absolutely everything to and obviously deserves to walk the journey with me, one step at a time. The idea of waiting until further into the pregnancy wasn’t to punish him or anything like that. It was more of my own beef with the fact that I’ve had some loss in life and also, being unemployed and on Medicare for the last year with no job or change in sight…well, would telling him only add stress even though he would never show it in a million years? Anyway, he’s my bestest friend in the whole wide world…which is why it took me all of 30 seconds to say, “Merry Christmas! I’m pregnant!”

We both decided not to share the news with anyone for a while…which was difficult because Jason’s whole family was at our house for Christmas, I had my birthday lunch with a bunch of my girlfriends two weeks later where I almost spilled the beans, and of course, just day in and day out interaction with humans in general!

Our plan to keep things on the DL for a while was blown with the nasty rodent incident, which you can read about here. We didn’t want to tell Em at 6 weeks that she was going to be a big sister because my last miscarriage was at 6 weeks and my first one was between 9 and 10 weeks. She doesn’t even know about the last one because, without candy coating it….adding to her list of dead siblings is a really shitty thing to have to do! Basically, I’ve had to exercise faith. And, I had to ‘go there’ earlier than I wanted to.

I am a realist. Even though I believe that God is real, that He is good, and that there really was a time in history before I existed on earth that an unseen God, who was totally in love with me, came in the flesh and died for my sins that I had yet to commit, no brainiac PhD scientist or theologian or wise Sherpa or shaman or anyone else for that matter will ever be able to convince me that one true God doesn’t exist and that He doesn’t totally stinking ROCK. That’s a faith that I can barely explain. However, when it comes to the tangible, I am just like Thomas the big fat doubter.

So, even though I knew I couldn’t make an appointment until I had reached 8 weeks, I called to set that up…

After that, I pretty much forgot about it…well, not entirely since I’ve felt like crappola for the majority of this pregnancy, but in my head and heart, not until that appointment when I got to see a heart beating and it swimming around was I going to engage. (*Note: I recognize the truth that a baby is a baby at conception…my heart just couldn’t take the drama and why lie about it?! #$%^&*).

Then, one random day mid-January I got a call from the office to reschedule my appointment because Mr. Favorite Doctor was going to be out of town the day of my appt. (He was out of town when Noah was born, as were all his partners, so a third party doc delivered my guy…) (He better not make that a practice or I’ll go all “What About Bob?” on him…wink wink!) She asked if I wanted it sooner. I told her I was headed out of town, but would do it the following week…what I didn’t tell her was that to avoid it altogether I would prefer to just show up some time in August…upon delivery.

The next day I had a VM from Mr. Favorite Doctor. It went like this:

MrFDr: Adrienne, this is Mr. Favorite Doctor. I was thrilled to see your name on my schedule. I know the girls in the office already called for you to reschedule because I’ll be out of town but I just wanted you to know that even if they say I am booked and have no appointments, if you want to come in, if you have any concerns or anything, just call me and I’ll fit you in. It’s not a problem.

My heart was all warm and fuzzy. I hit “Reply to Message” and said:

Me: Mr. Favorite Doctor, thank you so much for your offer! You rock! However, I really didn’t even want to come in there until I was totally sure I was pregnant, like, til 20 or 30 weeks…or maybe even 40. I’ll settle for a 10 week appointment, though. Jason and I will see you on the 1st of February. Have a good trip!

Fast forward to February 1st, please, because January 2010 was the slowest freaking month in Adrienne’s history! 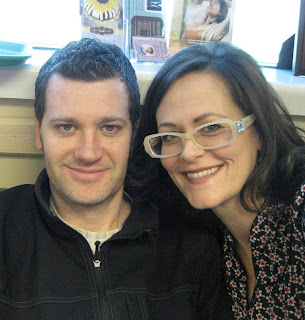 Here we are in the waiting room contemplating the fact that we’re both nearing 40 and starting from scratch…hence, the ultra-tired looks on our faces…

We showed up in the office and one of Noah’s nurses was on that day. She was giddy like a teenager. We headed to the exam room where she asked me a million questions, medical and personal, and just kept telling me how happy she was for us…even more excited than if she were pregnant herself. Finally she said she should probably get to other patients, so I waited in my fancy paper ensemble, trying not to freeze. I didn’t reach for it because, without fail, the moment you hop off the exam table while you are waiting, the doc comes in and then your hiney is hanging out and that’s just a bad scene. But there was a Cosmo on a little table in the room. I don’t read that magazine, mostly because I have always had a bent towards design and decorating magazines, but also because on the cover of every Cosmo there’s always a raunchy title to an article within that is supposed to draw you in and change your life forever, right? There are plenty of other fashion magazines that aren’t borderline porn, so that’s the obvious reason…but here’s what the ‘tease’ was for the article within this particular publication: Your Hoo-Ha: Your Way to a Healthy and Pretty Vagina.

Then Jason joined us in the ultrasound room…and finally, there it was…the cutest, sweetest, most active little gummy bear sized baby, kicking and punching, with a beautiful heartbeat, and, to my sweet surprise, a couple days ahead on gestation…

MrFDr: Your baby is healthy and strong and looks great! I am so happy for you guys. And, you are actually due sooner than you thought, by a few days.
Me: So, what? Do you call me, like a freaking Geriatric Patient or something?
MrFDr: Um, well, we usually leave off the ‘freaking’ and no, we call it “Advanced Maternal Age”.
Me: Seriously? Advanced Maternal Age?
MrFDr: Yes. It begins at 35, but you are young.
Me: Well, I have some gray hair and I’m growing a baby…I call that Geriatric…it has an ironic ring to it…
Me: Do you think you could possibly be in town for this delivery…you know, since you missed the last one while you were off fishing somewhere in the ocean?
MrFDr: I’ll certainly do what I can.

Then I found out Jason doesn’t really want to find out what it is…me? As stated above, I need a tangible and just don’t think I can do that, so I’ll probably win out. I’ll let you know…or maybe I won’t…

We talked about AMA pregnancy tests available to us. Mr. Favorite Doctor already knew any result would not change the outcome of whether we would have our baby or not, but I admitted that the medical research side of my brain was curious now because of Noah and wanted some of the tests just so I could study and whatnot. So, on February 26th, I’ll head back in for another ultrasound for further testing, not related to what Noah had, as there are no prenatal tests for Lyme’s, but for other stuff. Nothing I am choosing will be invasive, however.

The kid is who it is and we already love it…no matter how long. Period.

As we floated to our car I couldn’t believe our new reality. Jason’s new job would be starting two days from our appointment and we had a healthy baby growing in my belly…and the scale at the doctor’s office said I had lost 6 lbs. so who doesn’t love that?! 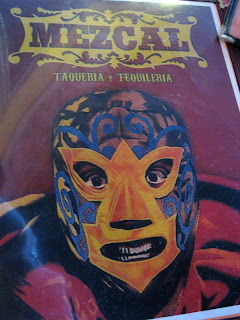 For those of you who have read here a while, you know Noah’s first and only movie was “Nacho Libre”…a family favorite. 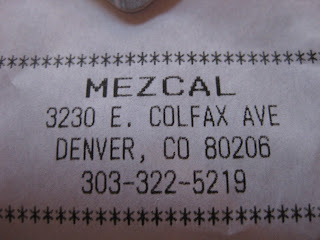 We headed to Mezcal, one of our favorite Mexican restaurants in the Denver area, for Sopes, the yummiest food for my tummy. The place is laden with vintage posters of Mexican wrestlers in true “Nacho Libre” style. We basically just kept staring at each other…humbled…in awe…slapped upside the head with the reality that we aren’t far off 40, and still totally in love after all these years and all the crap we’ve been through…and all the promises to come…life is sweet. 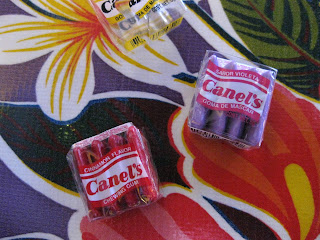