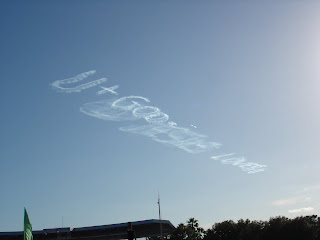 This picture was taken while we walked around Sea World on our recent trip to Florida. If you can’t make it out, in the background it says, ‘JESUS LOVE U’ and the foreground says, ‘U + GOD = ‘. The pilot was still completing his thought. If I were to guess what the answer to that equation were to be, there are many I could speculate…perhaps ‘U + GOD = PEACE or LOVE or HOPE or FREEDOM or ETERNAL LIFE or THE GREATEST RESTORED LOVE RELATIONSHIP SINCE THE LITTLE MISHAP IN THE GARDEN…’

There are many things in our lives that we try to substitute for God in our day to day equations. ‘U + busyness does not = God’ or ‘U + good intentions does not = God or peace or love or joy or hope or freedom’ or any of the things listed above. Those equations usually = burnout and disappointment. They = pleasing man, or ourselves, and in the end, end up equalling zero, because neither is satisfied.

Thank God for God, though! He is interested, very intimately, in each and every one of our lives. He is in love with all of His creation and desires so deeply to have daily relationships with ALL OF US. Can you imagine giving Your only Son for the entire world so the relationship that was broken in the Garden could be restored for earth and eternity? I can’t. But Jesus’ life, death and resurrection was not only for the 6.5 billion alive today, but the billions that have lived before us, and the ones that will follow. It’s mind-boggling at times, especially because Jesus was just trying to encourage us to ‘love our neighbors’ and that can be hard enough…Imagine loving the whole wide world and caring about our needs!

SOOO, in light of that thought, I want to tell you why my heart hurts lately…I’ve been pegged, tagged, pigeon holed, call it what you want, but I’ve been plunked into a category and believe me, I didn’t do it. I’m not in the ‘Mom’s who have taken their kid off life support’ club or the ‘Elite women who have someone waiting in heaven for them’ society. Let me explain…so, I’m in this great Bible study on Thursdays at my friend’s house. There are about 15 women, 2 who I am friends with and knew prior to the study’s beginning. Anyway, at the end we go around and share prayer requests. I’ve shared things like wanting prayer for details about Noah’s book and speaking engagements, the sale of our home or whether we are supposed to move or not, relief from the funky river parasite I picked up on Memorial Day weekend, help grocery shopping…I share these examples because we all have different things at different times throughout the days and weeks for which we are seeking direction and strength from the Lord. Well, then the person after me says something to the effect, “Well, that’s a hard one to follow…” or “Mine’s not as significant as that…” It’s actually happened in other circles as well, even here on the blog when I’ve asked people to share prayer requests. I bring it up because it’s a BIG FAT LIE!

The reason it’s a big fat lie is because God cares about every single one of us and He is concerned about what concerns our hearts! He doesn’t have a sweet spot on His ear for me, especially, because of Noah…The reason it’s a big fat lie is because it’s comparing and satan wants us in the tail-chasing act of comparison so we don’t pursue the selfless love of Christ toward others. It’s a big fat lie because division and a lack of self worth (not believing that whom the Son sets free is free indeed…) are two of millions of tools satan uses to turn our eyes from Christ. It’s a big fat lie because it could cause us to NOT pray for someone else or ourselves because we prioritize the need, rather than laying them ALL out there for God to handle, which He can! It’s not our job to emphasize one over another.

For comparison sake, let me put this out there for anyone to ponder…My life experience is different from one of my dearest friend’s who lost her mom when she was only 10. Talk about grocery shopping…she was the oldest kid, so probably spent a lot of time with her mom at the store. Should I never ask her to pray for me because I don’t comprehend losing my mom to a horrible disease? What about an old friend of mine that has lived overseas most of her marriage because her husband flies fighter jets? My husband isn’t in the military so I don’t know what it is like to daily wonder when he’ll be sent to war or whether he’ll come home alive or not. That is not my reality, but I’ll continue to pray for those families. Or, there’s a woman that due to ethnic and cultural differences, has called her mother-in-law every morning 10 years to see if there is anything she needs. My missing Noah does not negate this woman’s need for freedom in Christ. Or what about the college student? Just because she’s not enlisted in the military or out on the mission field does not mean that her diligence in studying for her finals is not as important a prayer request…What about the women overseas who have lost multiple children to disease and starvation or the kids that have no parents because of HIV and AIDS? There will always be someone on earth in a different circumstance than us, some worse, some better, but ALL of our concerns are important to God!

Yes, there are things that are trivial, like what color I should paint my toenails or who’s on the cover of a gossip magazine or if I want black beans or pintos. But when it’s something that is on your heart to actually talk to God about, and to ask others to seek Him with you regarding it, baby, it’s not trivial. It’s business and God is listening. I know that the heart behind the comment, ‘Mine’s not as serious or important’ is pure and good. Their empathy is genuine, but believing that God thinks my prayer request is more important than someone elses’ is the lie satan wants us to believe.
My heart is that people know God’s heart, and His says, “Humble yourselves, therefore, under God’s mighty hand, that he may lift you up in due time. Cast all your anxiety (cares, worries) on him because he cares for you. Be self-controlled and alert. Your enemy the devil prowls around like a roaring lion looking for someone to devour. Resist him, standing firm in the faith, because you know that your brothers throughout the world are undergoing the same kind of sufferings. And the God of all grace, who called you to his eternal glory in Christ, after you have suffered a little while, will himself restore you and make you strong, firm and steadfast. To him be the power for ever and ever. Amen.” I Peter 5:6-11 (emphasis mine)