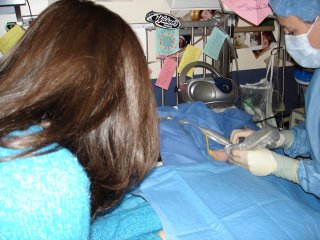 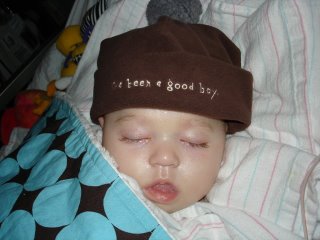 Thank you, Watertown Family Worship Center, for praying fervently for Noah today, and always…and thank you for the physical representatives, Phil and Gail and Stacia, who were able to be your “hands”. The prayer time for him goes until midnight for those who want to join with them…(I wrote this part of the post earlier…I know you are all praying, so, thanks! Could I please add to your prayer time a girl named Anna that is 4 and needs a MIRACLE! She has an inoperable tumor in her brain stem and the docs have “given” her an amount of days…I hope to go pray for her this week. Please pray for God to move mightily in her life and the life of her family. Thanks!)

Em and I were talking today about prayer. I told her that I pray all the time. She thought about it a minute and said, “Well, when we are eating and we’re all talking, you can’t be praying…” I told her that my spirit always prays and that’s just not something I can “turn off”. It seemed to satisfy as she didn’t say anything else about it…Ephesians 6:18

Anyway, today my most handsome little guy had a granuloma “burned” off by a nice ENT 4th year resident named “Frank Rodriquez”…just kidding, his name was Jeff, but I was giving him a hard time because last time Noah’s granuloma burn session had a slight mishap and the “ooze” caused a chemical burn on his skin…he was wondering about me “dropping” his name to my sister’s ENT for when he is done with his residency in a year and a half…I said if he didn’t burn him this time, I’d drop the name…it was funny, I guess you had to be there/here.

Today, after friends had already arrived for a visit with their two children UNDER 12, we learned about the seasonal rule regarding visitors…apparently the new sign on the door that the CA was posting states that it is RSV season and visitors under 12 that are not family are not allowed, SO, I wanted to let you all know in case you were thinking of coming for a visit and you are younger than 12…let’s pray that there’s no such thing as RSV season ANYMORE! Heck, I’m praying that hospital’s go out of business because there aren’t sick people ANYMORE!

Anyway, Noah’s getting a new PICC line inserted as I write. The one he had in his ankle for 3 months got caught under the adhesive dressing and as we did his leg exercises, it pulled on it and worked it right out. Since Noah’s muscle tone is low, his veins are very difficult to find. She has to use an ultrasound machine to find them…Basically, what can be a simple procedure is very tricky with our little man. Ashley and I prayed for the PICC nurse, so we’re trusting God to do the rest…(update as of 12:45am…the PICC line insertion did not go, but the other one is still in him 17cm, it was at 30cm, but it’s still up in his leg pretty good, so another nurse will take a look at it in the a.m. I’ll keep you posted. The picture of the blue bed has a little skin peeking through…that’s Noah’s arm…)

Anyway, speaking of God, He is so Great! He has positioned Himself in such a way that Noah’s healing HAS to be MIRACULOUS and the ONLY ONE that can heal him is Him…we trust Him. He wants to be sure it’s quite clear that no man receive the glory…He is good and He sees the bigger picture. In case some of you think this is the first I’ve realized this, it isn’t…I’ve known it since the first moment we walked in, but in case any of you are still hoping there’s a human doctor that has a cure…there isn’t. I’m not speaking negatively, please understand. I can’t find the negativity in knowing beyond a shadow of a doubt that Noah’s Healer is the Creator of the Universe. I have more hope in Him than anyone or anything! Anyone who knows me knows I can’t lie and I don’t blow sunshine at people just so it sounds fluffy…like I mentioned before, truth can come across harsh from me, but life is too short to speak anything but. The truth is, God’s word says, “Surely He took up our infirmities and carried our sorrows, yet we considered Him stricken by God, smitten by Him, and afflicted. But He was pierced for our transgressions, he was crushed for our iniquities; the punishment that brought us peace was upon Him, and by His wounds we are healed.” Isaiah 53:4-5 My truth is my God, it’s my faith, it’s my hope and I hope it’s all I ever speak! I’m obviously praying for Noah’s miraculous healing to happen on this earth, but if it happens in God’s presence, I’d say Noah most certainly has already defeated satan’s purpose in any of this, of that I am quite confident! I am as proud as any mom could ever be…

From my dear friend, Heather, I received a Sara Groves CD tonight, and have been replaying the song “Add to the Beauty”. I want to add to the beauty of what God wants to do on this earth. I want to walk in the fullness of what He has for me, for us, for our family, for the Bride of Christ. If, when people meet me, they meet ME, I want my heart to be grieved because they were meant to meet God…