Noah got a new pumpkin hat from his friend, Miss Laura. 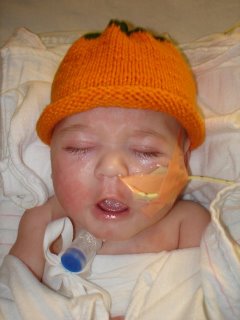 She just whipped it up along with a yummy dinner and 8 inch chocolate chip cookies that should be sold at Whole Foods for a million dollars! (Interesting that 3 different cookie deliveries were made the week I told everyone that I’m trying to get in shape…)

Anyway, here’s Noah getting a little mad…he’s looking a little rough as he continues to break out in an awful rash that no one can explain. His eyelids are puffy and his feet are really swollen. He had been on IV fluids but when his formula was reintroduced, they didn’t discontinue the other fluids even though I kept telling them I was concerned he was taking on too many fluids…now he’s just on formula. The biggest frustration is that there isn’t anything being done to “support” Noah. I’ve brought in pro-biotics for his healthy flora to be restored but that was put on hold by the docs for a week while he was sick. Why they would do that blows my mind. It’s the only thing that is GOOD that is going into him!

Tomorrow I am getting baptized as a grown up. I was baptized as a child but have wanted to be baptized as an adult for about 19 years but just haven’t done it. Jason was going to baptize me on our honeymoon, but, well, you know…and then in Mexico a few times I thought about it, but we forgot again. Well, 3 weeks ago I was thinking about it again and Pastor Johnson dropped in to pray for Noah and mentioned that they were going to have a baptism service in 3 weeks. Well, that’s tomorrow. My parents just drove in from Phoenix and will watch Noah while Jason, Em and my sister, Ashley, and I go to church.

The reason I am doing it at this point in my life is that I want a new beginning. In this I mean that from here on out, I want to live my life with meaning, purpose, passion and perseverance. I want to be a blessing to my husband and kids and be an encouragement to anyone I encounter. This journey with Noah has opened my eyes to how self-absorbed I have lived life thus far. I apologize to everyone who has been affected by me in that way. I am truly sorry! I desire to live selflessly, so this is my public expression of repenting of selfishness. HOLD ME ACCOUNTABLE TO THIS, PLEASE. DON’T CANDY COAT IT WHEN YOU SEE IT IN ME, TELL ME WHEN I’M SELFISH! Anyway, Em and I are off to bed. Please pray for the boys as they are at the hospital tonight. Jason and I are praying Noah out of the hospital before RSV season starts!