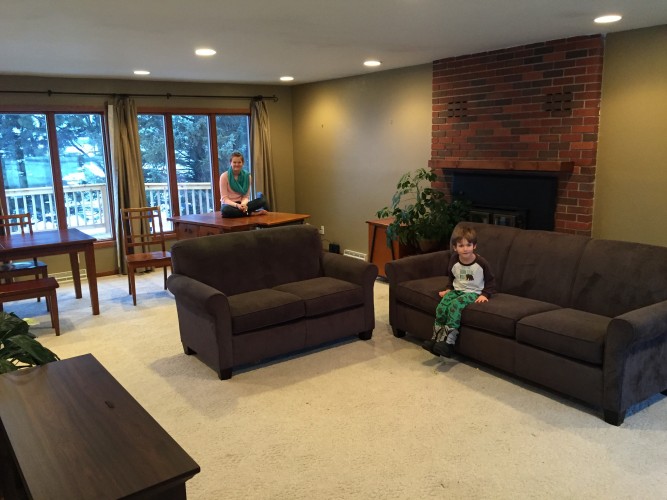 Okay, before you read further, I jest. I’m not the new HGTV star, but I have recently put on a new hat, a hard hat at that, and have kind of naturally slid into the role of General Contractor on a remodel. Blue prints are in my DNA and I think I might have a new itch…

So, as some of you know, we “ran away from home” what is now almost a year and a half ago. And by “ran away” I mean, we, the “Graveswolds” as we sometimes ridiculously refer to ourselves, decided that because Jason worked from home, and “home” is wherever the 4 of us are, it would be an awesome idea to sell most of our belongings, house included, and spend a season in “flexibility.” This time has included stays in Colorado, California, South Dakota, Wisconsin, Illinois, Minnesota, France, Hawaii, Australia, an overnight in Nebraska where I got to hear and meet the raw-thentic Glennon Doyle Melton, and an upcoming trip for me (the #loneviajera) for the first time ever to Nashville, TN, for some serious girlfriend time and a hunormous Bevy brainstorm with our new CEO (details on that later…). This doesn’t include all the trips Jason’s taken on his own for work, but it’s at least given us the opportunity as a family to tag along once in a while and be together.

Anyway, part of our time in SD has been to reconnect with old friends, apparently make great new ones, and hang out with Jason’s mom, who has been a widow now for 18 years, as she retires. Prior to her leaving for what will be most of this semester to be with one of Jason’s sisters and her family in a time of need, she invited me to meet her for coffee at Caribou, aka, my office.

She has been wanting to update some things in her home for several years, to make it less maintenance for when we all gather in the summer and as she travels more, but she worked full-time and has been on the go quite a bit as bonus grandma of the century, so hasn’t had time to do it. Having known me for 25 years now, and knowing I’m the daughter of a builder and LOVE remodeling and design, she asked me at the coffee shop if I’d go ahead and remodel her house while she was out of town. She told me she trusted me and to go for it!

WHAT KIND OF AWESOME MOTHER-IN-LAW DOES THAT?!

So, I called a local contractor in January to see if he had some time to do a few minor structural things…because, I knock out and rearrange walls in my head all the time when I walk into spaces. It must be in my genetic makeup…Anyway, we emailed back and forth, crunched some numbers, and he lined up a few sub-contractors for some of the jobs, but I told him I also had a few subs I had learned about in town and would be contacting them for references and price comparisons.

I now know a great tile guy, an incredible taper, sheetrocker, painter, hard working contractors and carpenters and gas-line guys. As the daughter of a builder, I watched and observed the process over the years. Our dad would take us to his job sites once in a while and it would be fascinating to see a home, resort, neighborhood, or commercial property go from ground break to foundation to plumbing to lumber and electrical to sheetrock to finishes, etc, etc. I loved my dad’s big pale green drafting board and the rolls of old blue prints stacked in the corner. My sisters and I grew up sketching floor plans and flipping through Architectural Digest and appreciating the beautiful design and construction of landmarks, rather than necessarily paying attention to where or what we were visiting.

I loved, then, watching my mom walk in and choose finishes and design elements, then see all of it come together. Decorating and staging was one of my mom’s favorite jobs, so seeing a place my dad had built eventually transform into a home, either for us or for sale, was simply part of my upbringing. As I look back at memories of my childhood I can trace my lifeline according to which house we lived in, in which city or state, and by the decor. Much of it traveled with us, like my mom’s blue and white china, my antique sleigh bed, and the old hutch that was my parents first piece of furniture. But one reason this season of travel and uprooting was an easy idea for me was that, no matter where we lived and which things made it to the next house or not, my family was always there.

Anyway, I’m waxing nostalgic and what I meant for this post was to share a bit of show and tell of the process of what I’ve been up to over the last 2 months. The job should wrap up in the next month, fingers crossed, but this is kind of why I haven’t been faithful to my other love, writing, as of recent…

(*Disclaimer: I have moved around 30x and have become quite efficient at purging and packing up rooms, and, as a result, didn’t take pictures BEFORE, before, where the house looked all pretty the way my MIL usually has it decorated. I had already packed up breakables and artwork from the wall, but you can get the gist of it…)

Be sure to tune in again…there’s more progress to see!