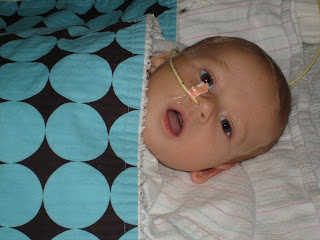 2nd or 3rd day in hospital
(Notice the blue in his blankie is the same as the house in Mexico. Personally, I could stare at pics of him all day…oh wait, I guess I already do that:))
I just wanted to say ‘Thank You’ for all of your encouragement and prayers. I’ve been praying that God would lead me in the right direction for the right counselor at this time. I have received a few names, one operates on a sliding scale, so that’s helpful given our current financial sitch, but I’m just going to trust God for the right person and the right timing. Personally, I may take up garage ‘saling’ just to break dishes…I really like that idea. Actually, I have been recently missing a self-defense class I took at the college where I worked. We got to spar each other, and let me tell you, that was FUN! I used to do kick-boxing, too…that was exhilarating! It made me feel a bit “G.I. Jane” ish. I want to hurt something, not someone, so a punching bag would be nice…recently, training for the AVON walk, I get a lot of time to talk to God, listen, and think, but the only thing that hurts after that is me, from the hips down! A padded room sounds inviting,too, for obvious reasons. *I read a passage from the blog from a year ago…this must be a yearly anger emerging…you may recall this rant if you’ve been here a while…
The thing is, even though Noah could have been treated upon his admittance to the hospital, I don’t blame the docs or nurses. I am disgusted with ‘The System’, but I know that most of Noah’s docs and nurses loved him and wanted to care for him…and cure him. One of the chapters in Noah’s book will be ‘My Theory’. There I hope to crack open a whole new world of saving little ones and begin to raise awareness. I’m still doing a lot of research so don’t want to speak prematurely on any of it, but with regard to Noah, I do believe his rapid health decline could have very much been prevented.
Well, Em and Jason are off playing tennis so I have a few moments to myself. I need to email my growing ‘Noah for Knockers’ team because we have some serious fundraising to do. We have 4 members, soon to be 6! One is a cancer survivor from blog world that I look forward to meeting and walking with. Another is a ‘Locks for Love’ donor from January 12th who is studying diligently to one day be a Physicians Assistant. The other two are girlfriends from college…one from Seattle and the other lives in NYC. That means, as a team, we need to raise $10,800.00! Holy Toledo, Batman! We have $50, thus far, without trying, so need to get a plan. We want to do a silent auction and get sponsors from local businesses. If anyone is interested in donating a service or items to the silent auction, you can email me here. But, given the recent advice, how much would you pay either to break a plate yourself or sponsor a mom who would love to break multiples? Huh?! Shall I do a ‘Break a Plate’ drive? I think I’m onto something here…helping people find a cure while helping others deal with anger…I like it…