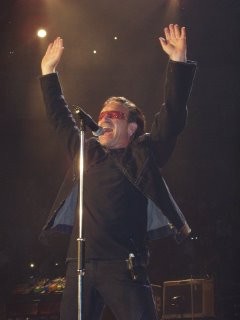 (Moment of Surrender – written May 29, 2015, on the way to Hawaii with the #thegraveswolds)

Prostrate in the back row of United flight 1296 to Kona, I settled in at 34k cruising elevation and had some time to reflect, breathe, and soak in the silence. Ryan and Daddy were well taken care of, sister in a row of her own, slowly unfolding her wings…I saw the opportunity to love myself with some solitude and psalms. With my Bible in the pocket of the middle seat, I grabbed my phone and opened to the first psalm on U2’s new album, “Songs of Innocence,” the one I’d been listening to on repeat for almost a year, and finally heard the words above the noise, above the clouds.

A bit of history, because this one is long-winded and will be several parts.

When I was 13 years old, my best friend Stacey invited me to go to a concert. Her dad had gotten 6 free tickets to a newer band of whom he’d never heard, so her older sister and her friend and the two of us went with two “chaperones.” My dad was a bit hesitant, but because we were going with a tall, muscular black guy and his girlfriend, he let his parental reigns out a bit and off I went to my first rock concert. Little did he know that once we went through the venue gates, we all went in 3 different directions. Compton Terrace was an outdoor venue south of the Phoenix metro, located in the desert near a raceway, surrounded by tumbleweeds and saguaros.

I wore skinny army green cargo pants, strappy sandals with a snake skin pattern, and a muted yellow button down top…in 7th grade, you remember what you wear when a memory digs down deep into your psyche.

A few weeks before the concert Stacey and I did what all music lovers did…we kept the radio dialed into our favorite stations and played “Boy,” “War,” and “Unforgettable Fire” tapes, committing to memory the lyrics of our new found favorite songs. It didn’t take long for me to fall in love, not like Beatle mania type of love, but with the songs, the lyrics, the beat. Ok, fine. I may have thought the lead singer and drummer were super cute, but at the time Rob Lowe, C. Thomas Howell, Michael Schoeffling, Adam Ant, Duran Duran, and the Stray Cats were all posters on my wall.

But the music made me come alive…

The concert venue was open seating, standing room only, so we were able to stand as close or far back as we wanted, as long as we were willing to navigate the crowd. I saw blankets on the lawn that barely covered the feet tangled beneath, smelled air I didn’t recognize…a girl riding through the crowd on a guy’s shoulders even barfed on my shoulder. All my senses were alive. I remember on the way back to the car in the parking lot, a drunk guy slapped my teenaged butt, to which I slapped his drunk hand and kept walking, seemingly unharmed, but adrenaline flowing even harder. What stands out the most to me, though, as maybe 3000 of us gathered, was the energy, the passion behind the voice, and the way the band members played their instruments with their every part of their beings.

It wasn’t just music…it was epic.

And, though I know everyone’s perspective is a bit different, in my memory, I swear we encored the band to play “Pride” three times. I could be mistaken, but they played it more than once, and the energy of the sing-a-long was melodic and spiritural. Bono waved a white flag, knowing years ago, foretelling like John had, the Good News, that Love truly is the answer, and nothing can ever snuff out love.

And so it was birthed in me, a love for the music of U2.

I don’t really care how it sounds. I’m not a creeper fan who knows the names of the band members’ pets or schools their children attend. I have no desire to cruise past their driveways or anything weird like that.

Yes, I’d absolutely love to break bread with these guys and their families, talk about Jesus, pray for one another, and encourage each other’s weary souls, because I feel like I know them, and for sure, I feel like they have known me…most of their songs reading my mail and searching my heart and mind for years. I do pray for them…to continue hearing God’s voice through the gift of song, for their ministry to reach far and wide, for hearts to be opened beyond the albums and concert shows to God’s miraculous Grace. But listening to their music and being challenged to grow closer to God through it will have to suffice until that day comes, and I’m okay with that, too.

The music of U2 is woven into almost every season of my young and mature adult life. The way a friend from high school can recall what song was on the radio when a certain memory took place, I could recount my life on a timeline of U2 albums, which songs from the album I resonated with the most and why, how that’s changed over time, and which ones I still replay because there isn’t one that ever gets old to my ears or soul.

Some songs have comforted me, others kicked my ass and reminded me to be who God designed me to be. Many have opened my eyes to see others with God’s perspective rather than through my own lens or the limited lens of a privileged American white girl’s life.

What it really boils down to for me is, through every season, in spaces where I haven’t felt like I belonged or was welcomed, and even on my best day, this music has been more than entertainment…each song has been a place where I encounter God and am reminded of why sharing our stories is the profound way we discover we are all children of God.

I am grateful for the example of what it looks like when some people follow their hearts, rather than fearing the crowd.

I’m still working on that…