Conversations with a 5 year old 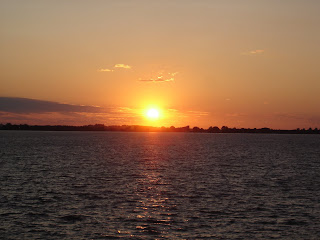 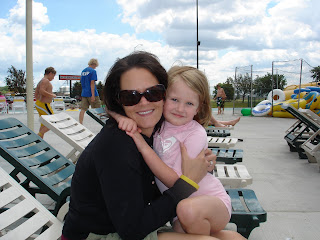 If Emily looks older in the above picture than she did yesterday, it’s because she’s 5…but it’s also because she learned about Noah today…

I did not intend for it to happen this way, but on the way home from dinner it was just the two of us in the car. (Jason had to leave this afternoon for Chicago.) Anyway, we passed a cemetery and here’s what followed:

Em: Mom, what did they do with Grampa Steve’s body? (She knows her grampa was buried…)

Me: Well, when our spirits leave our body, we die. There is nothing left to tell our heart to pump so our bodies stop working.

Em: Yeah, like when a car runs out of gas and the person has to leave the car and go look for gas. (Said very matter-of-fact)

Me: That’s right, Em! The car just has to sit there on the side of the road. Anyway, when we know the Lord and our spirit goes to Heaven, our bodies are left here on Earth. Some people bury the person that they loved in a coffin. It’s a long wooden box with fancy pillows in it and they dress the person nicely and put some preservatives in their body because our bodies decompose when our hearts don’t pump our blood. Then they close the box and dig a hole in the ground and cover it up with dirt, grass, flowers and a pretty head stone that says their name and how much they were loved…

Me: And then, well, um…you know how God picked up a handful of dirt and blew life into it and made Adam?

Me: Well, sometimes when people die and their spirits go to Heaven if they loved the Lord, their bodies are put into a big metal box and someone turns a switch that makes it extremely hot and they turn into dust or ash, like Adam. It’s called cremation. There’s a scripture that talks about how we came from dust and to dust we will return. But even when a person is buried they eventually turn to dust, too.

Em: Do you bury the dust?

Me: Well, some people do, but the ashes or dust are put into a bag and then given to the family of the person who died and they decide what to do with them. They can put those ashes in a pretty jar or bury them or spread them on the beach or a garden or in the ocean. Mommy has a dear friend whose husband wanted his ashes to be put into the ocean because that was his favorite place to be. Then, when the waves move throughout the Earth, it’s like his body gets to be a part of it. They are all ways to remember that person.

Em: What did you do with Noah?

Me: (gulp) Well, your daddy and I decided to have Noah’s body cremated.

Em: Even his guts and stomach? You can’t keep those parts in a box…

Me: Even those parts…all of his body, but it all turns to dust. You see, when a person dies, even though we love them soo soo much, we can’t keep part of their body with us, except a lock of hair which I have of Noah’s. So that is why people bury the body of the person they loved or have them cremated. Then they can either go visit where they are buried or have it at their house in a pretty jar or spread their ashes in the ocean, for example, to remember that person…

Em: Where are Noah’s ashes?

Me: Do you remember the day we left for South Dakota when daddy needed to run an errand by himself?

Me: Well, your daddy was picking up Noah’s ashes. I know it took a long time, but we were too sad to do it until then. They are in a bag in a sweet wooden box that has his name on it and a teddy bear…

Em: Wow! I can’t believe his ashes fit in a small little box! I want to see it…

Me: It’s at home in Noah’s room. I’ll show you when we get home, sweetie.

Em: I want to keep Noah’s dust with us. I don’t want to throw him in the ocean or sprinkle him in different places.

Me: Okay. (Now going with the flow, different from original plan…) We’ll keep his ashes altogether with us…

Me: Em, what do you think about all this?

Em: It’s okay. I think we should just leave it like you did it…

Me: (Yeah…pretty much have to since these things are irreversible!)

So, I talked to Jason tonight and told him about our conversation. He felt badly that I had to do it alone, but I told him it seemed to turn out okay, better than the day we got home from the hospital and he started to tell her about a big oven! Em had asked Jason what they did with his body at the hospital. She said, “Did they throw his body in the trash can?” We told her ‘No’, but then Jason started to tell her about a big oven. I gave him a serious elbow in the ribs and whispered in his ear that you put cookies in an oven, not a little brother! She lost interest and went and played with her aunts and uncles…

Now she knows…she seemed to be at peace with it all. I guess I didn’t know when we’d have to explain cremation, but knowing her, I knew it would be sooner than later.