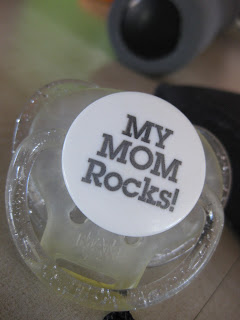 Dad was out of town so we celebrated officially once he was home that following weekend with family and friends and sort of allergen-friendly cupcakes…and balloons.  Lots and lots of balloons.

When Emily was 6 months old, we chucked her pacifier to the curb.  Not literally since that’s littering, but you know what I mean.  But at 6 months, she didn’t remember a thing, so it was a non-issue.

Well, fast forward and enter baby brother and mom’s “Advanced Gestation,” aka, mid-life pregnancy/crisis, and let’s just say, I threw other things to the curb, like, say, rules on pacifiers and rigid sleep training and all the modern rules, like giving a rip what any book might say!  Yes, I “sleep trained” Ryan, but not quite as militantly as I had Emily.  And I’ve fed him very clean, which I didn’t do as well with Em, but all of these things are partially a knee-jerk result of the 8 year gap, which is really only a 4 year gap, if you know what I mean…

What I’m sayin’ is:  when your big brother dies, it both works in your favor and detriment as to how on earth your parents may “wing it” and raise you, accordingly.

So, ANYWAY, as far as a pacifier goes, I chose not to get my panties in a wad about it and let Ryan suck, suck, suck away.  At least until Daddy returned shortly after his 2nd birthday.

A reader here a while back, but I don’t recall who, gave me the idea in the first place!  (Thank *you*!)

I prepped Ryan for about a month…

Me:  Ry, you are almost 2 years old and so that means you’ll be BIG.  This also means you won’t be sucking your pacifier any longer.

Me:  And, so, on your 2nd birthday, we are going to tie your pacifier to some balloons and send it to the Moon.  Every night when we go to bed you can look out the window and tell the Moon and your pacifier, “Goodnight!”

Now, let me preface this to say that one of my dear, dear friends who also lost a child encouraged me as I let Ry suck away for 2 years, “OH!  Don’t take away the one thing that brings him comfort!”  And that’s exactly what I did.  I didn’t lose sleep or worry about it, because, of course, there’s always braces, right?!

But there’s more to the story…

And then he smiled his great smile, which, incidentally, was straight and white…

Nice, except Jason and I are taking “Financial Peace University” right now and let’s just say several thousand dollars for Ryan’s braces could, indeed, be used for his education one day, or towards a vacation for me and the hubster, or supporting a hospital in Ethiopia, or, or, or, I don’t know, maybe getting out of debt!?  But that’s another post…

So, anyway, back to “My Mom Rocks,” and whatever it was I was saying…

Oh yeah.  So, here are some pics of the day Ryan’s pacifier went to the Moon…the day he became a BIG boy…the day he saved us a few thousand dollars, or at least, the day his mom had peace in her heart that she was honoring a dear friend and finally taking the expert opinion of a professional. 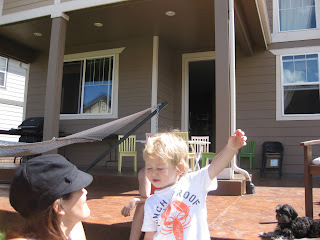 It’s been a week and a half now.  Naps on day one and two were a bit rough, but he has adjusted beautifully.  His teeth haven’t straightened out, and he does point to his teeth and tongue when I put him down to sleep, but then he says, “Goodnight Moon!” and all is well.

So, let’s face it:  we all have “pacifiers.”  If you were to take to heart the sentiments of a selfless man, who was saying more to me than just the obvious, what “pacifier” would you give up?

* We miss you, Dr. Ryan Arnold, and think of you and your beautiful family, every. single. day.  xoxox

One thought on “"Goodnight Moon!"”