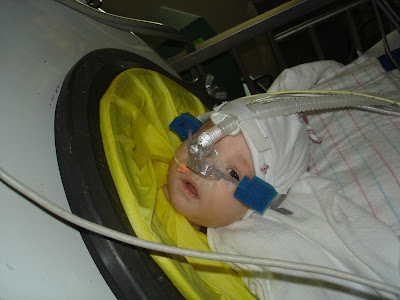 Today is the day that Noah’s lung collapsed…The night before on the 22nd while holding him I could feel something was wrong with his breathing. I told the nurse I wanted an x-ray right away. She reminded me of the pecking order, that only a physician could order x-rays. I told her to tell the physician to order an x-ray because I knew Noah’s lung had collapsed. (*side note: I’m not a fan of politics in medicine…) Jason spent the night and I went home to sleep and shower. My best friend was in town and the next morning I was supposed to take Em to a pre-preschool play date with all the children from the 3 and 4 year old classes. That morning while I was pulling up to Em’s gathering, Jason called to tell me that Noah’s lung had indeed collapsed…the doctors had ordered an x-ray that morning (great idea). Noah was placed in the iron lung in the above picture in an attempt to re inflate his lung without having to intubate him…it didn’t work.

God told me to read Colossians and Philippians the other morning…

Noah could have written the first chapter of Philippians. So could have Steve G., Elizabeth M., little man Ricky, sweet little Isaac, Jack M., Jason’s gramma, Billy N., precious Elliot, and countless others…so could have living examples like a teenager named Collin, a cute little guy named Brody, Josh B., Heidi Jo W., and maybe your loved one or yourself…

But Paul wrote it by the inspiration of God. He wrote the words that the above mentioned felt and many continue to feel. He also wrote it to inspire because many people who are imprisoned by one thing or another (whether literally in the state penitentiary or physically in their own bodies) mentally, emotionally and spiritually stay in prison.

“Now I want you to know, brothers, that what has happened to me has really served to advance the gospel. As a result, it has become clear throughout the whole palace guard and to everyone else that I am in chains for Christ. Because of my chains, most of the brothers in the Lord have been encouraged to speak the word of God more courageously and fearlessly.” Philippians 1:12-14

Noah did not die in vain. Satan did not receive credit for Paul’s imprisonment. The people that I mentioned above who suffered in their bodies and went on to be with Christ always pointed others to the Father. The names above of those still living are doing so for the glory of God. When Adam and Eve fell to the wooing pride of satan’s ploy in the Garden, certain things were set in motion on earth outside of God’s physical presence. What satan intends for evil, God will use for His glory. Job wasn’t a pretend story. This isn’t Hollywood, it’s real life. The real tragedy is not that heroes suffer or die before we think they should, it’s that some of those involved aren’t living, they are only watching. If age were a factor, more people should be upset that Christ died when He was 33. That’s ‘young’ in earth mentality. Why when reading the obituaries do some people think it’s fine that the 90 year old died but not the 15 year old who had so much to live for? What if the two arrive in heaven and are able to see the bigger picture and the 90 year old says, “Oh man! Earth was fun and I loved my family, but I can’t believe I had to be there so long!” and the 15 year old says, “Thank you, Lord, that I got to come Home sooner than that guy…”

I’m not pretending to have all the answers. I just know that unless I live life with an eternal perspective of being part of the Bride of Christ, my life here on earth will seem hopelessly trivial.