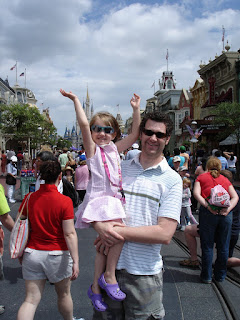 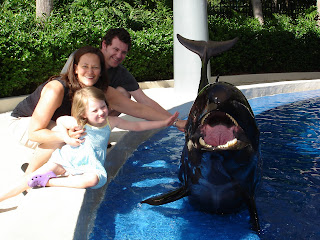 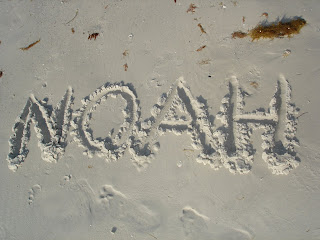 First things first…Nick is doing so much better! He’s out of the ICU and has been able to have visitors, though his daughters want to see him so badly and haven’t been able to due to fevers and sniffles…another thing we can add to the prayer list. The docs are still waiting for lab results, but the important thing to note is that Nick is miraculously here today and that is undeniable. Thank you, Lord!

We had a great time in Florida! It was a humbling experience to be blessed by so many different people who generously gave of their resources so that we could take a trip as a family. Our church linked with friends in Celebration (Orlando) at Celebrate Church, along with people within the Celebration community, and, in a nutshell, knocked our socks off! We spent a few days at a gorgeous resort near Celebration, went to Mickey’s house, saw Shamu, ate in downtown Celebration every night, saw fireworks, and hung out at the pool each day. Jason made me go get a facial and a massage, so, as hard as it is to talk with stuff on your face and lips, by golly, I shared Noah’s story and the love of Jesus with those two ladies! We even got to go backstage of the dolphin show and see the animals up close and personal! Definitely a highlight memory!

So many English were on holiday everywhere we went. I met a woman named Joyce from Chester at the pool one day. She was on holiday with her daughter and her family for 5 or 6 weeks. They had been all over Florida. I shared with her why and how we were enjoying such a special trip. She said we have something in common…She lost her first child to miscarriage. Her daughter is married and has two children. Her son, John, died 13 years ago from cancer. He was 26 years old and had just been married one year. She assured me that she will never forget, and neither will we…she shared that some people avoid speaking to her altogether. Others literally cross the street when they see her coming, to act as if they did not see her, rather than saying anything. So odd…13 years later. Her friends still speak of John, obviously not all the time, but I could tell it meant a lot to her to even share his life with me, a complete stranger. It was interesting to have a glimpse of someone else’s life years down the hard road. I encouraged her of the hope we have in Christ and the peace of heaven. I can honestly say that was the first time I hugged a stranger in my bathing suit! Jason made me go get a facial and a massage the last day at Reunion, so, as hard as it is to talk with stuff on your face and lips, by golly, I shared Noah’s story and the love of Jesus with those two ladies! (And they thought I was their captive audience…I was on vacation, but not from sharing a message of hope and peace!)

We then headed out to St. Petersburg for the final days of our trip to a great condo another family offered us. The beach was crushed shells out front of the hotel. It was beautiful and warm and very soothing watching and hearing the waves hit the shore. We spelunked for shells everyday, gathering a collection of our favorites which we brought home and have sorted a few times. Emily claims we can hear the ocean in every single one!

The last day we drove out to a state park to comb the beach before dinner…what is it about sand that beckons every person, I would venture to guess, to draw a picture or write someones name? We all know it is going to eventually wash away, yet we still do it. It’s like natural graffiti. I wrote Noah’s name because I was thinking of him every minute of everyday…we were on a vacation because of him…That night Jason tucked Em in while I started packing all of the generous gifts we had been given into our suitcases. We don’t have cable, so when we go on trips we flip through the channels, usually getting sucked into some cake decorating contest on the Food Network, a remodel show on HGTV, or some medical mystery on TLC. Well, as I packed, I watched a medical mystery show and lost it when one story was about a baby boy whose prognosis was bleak. I was so sad those parents and older siblings endured all they did, but was encouraged that all of them said their lives were richer because of it. Their little guy is still with them for only God knows how long, but it was cool to see them making the most of everyday instead of living too far into the future…

Anyway, Jason, Em and I are so grateful to have had a week in Florida courtesy of so many generous people. Thank yous are on the way, but we enjoyed each other and being able to meet some of you. We pray that you and yours would be blessed for how you have blessed our lives and hearts. What a memory to treasure…a trip because of Noah! Thank you!