(This post is from Valentine’s Day, but because I drafted it last night, it says yesterday’s date. I’m not that computer savvy, so will figure out how to have my dates and posts line up…Have a great Valentine’s Day. Did you know that it’s okay to love everybody everyday? Yay for that!) 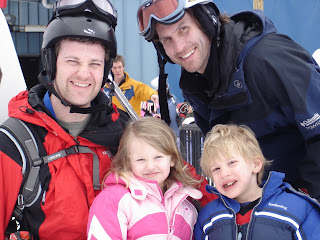 I need a vacation from my vacation…Not really, but boy were we feeling OLD and creaky after only a few runs of skiing! Well, I know I can speak for myself, anyway. I didn’t ski last season because I was pregnant with Noah, so I was creaky just putting my boots on and trying to walk to the lift. That set the tone for the remainder of the day…walking. We put the kids in ski school and headed up the mountain. The mountain we went to has a lot of “cat walks” so, instead of downhill skiing, a lot of cross-country skiing was actually taking place! After I took a wrong turn, leading the guys into the woods and hitting two boulders dead on, I decided to take off my skis and hike down a bit until I found an actual trail. We really did have a fun time being together, but utter exhaustion is supposed to be the state for which you take a vacation…

Anyway, as the days move forward, I try to reflect, not living in the past, but really trying to wrap my brain around all that has transpired and how one little, beautiful baby boy could change my life and outlook on it in such a radical way. I am so humbled by stories people, some that I know but mostly those that I don’t, send me about the role Noah’s story has had in their lives. There are days and minutes that I want him back so badly that it aches, but I can honestly say that at the same time, the peace of God is so sweet, knowing Noah is complete in the Lord’s presence, that I wouldn’t trade having him here if it meant that the changes that have occurred, not only in my life, but in so many others, were to be reversed right back to where we all started. How tragic!? I say that because I have such hope. Yes, it made Jason sad to know he’d never take Noah skiing. (Plus, skiing in Heaven is probably way better! If you fall, it’s into a cloud, maybe…and, if you get stuck on a catwalk, God probably gives you a boost? JK) I’m sure as milestones pass, there will always be a sense of loss, but it’s not debilitating because of our hope. Our hope that God’s not a liar but that His word is true.

The song by Sixpence, “Trust in the Lord”, taken from Proverbs 3:5-6, keeps playing in my head, though I haven’t listened to it in years, probably 8 or 9. It says, “Trust in the Lord with all your heart and lean not on your own understanding; in all your ways acknowledge Him, and He will make your paths straight.” This scripture says a lot about the kind of trust we are to put in God. It does not say it won’t be the most difficult thing on earth. The wording does not read, “Sometimes, if you feel like it, you can trust in the Lord, but you don’t have to do it with your whole heart, just a little, since you probably know better than the Creator of the entire Universe. Then, with the 10% of your brain that God has revealed to man, figure out why you are walking through this valley or resting on that mountain, and how it fits into the bigger picture of Life. If you don’t understand His bigger picture, well, then, just don’t acknowledge that He may have a greater plan, because, hey, He doesn’t know what He’s doing anyway! Actually, why don’t you just do it all on your own, since that’s working for you…”

I say all this because, for some reason, we as humans tend to think that life on earth should be easy, that it should be fluffly, that any time bad things happen to good people, God’s messing with us and we really do have a better idea of the scope of how our lives here should pan out. I told my friend the other day that it would have been cool if, when we died, those that had intimacy with Christ would physically just get “beamed” up so that it was a little easier which choice to make here on earth. He said that would be nice but it takes away the need to live by faith…and that takes away the pursuit of a deeper life…It doesn’t mean death, sickness, horror, sadness, etc do not occur and don’t hurt like hell, literally, but I’ll be the first to admit that, if I’m only using 10% (if I’m lucky) of the brain God designed, God most certainly does not fit into a box, and I’ll trust that one day, if He is so gracious to do so, I’ll get to see the Super God “IMAX” version of how your story and ours were necessary for the Big Picture…Now the scripture is so clear. I know I can use ALL of my heart, for that is something I can choose, but trying to wrap my 10% brain around the 100% universe, well, God put that scripture there to save us from a lot of headaches!