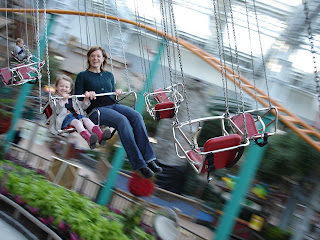 So, this is a picture of Emily and her Auntie Terra flying through the air at the Mall of America in Minnesota last week. Jason had to work in MN and in SD, so we went along for the ride. We have family and friends in each location, so we packed in a lot of short but sweet visits. The picture sums up not only our whirlwind week, but the state of my life right now. What’s that? You were wondering what the audio on this particular picture might say…Well, funny that you would ask! In order to get this great action shot of Em and her Aunt thoroughly enjoying themselves, I was indeed flying through the air backwards! The audio is of my guts churning and the fluid in my ears splashing about uncontrollably as I experienced vertigo the remainder of the day! There really is no need for a reminder never to repeat such Tom Foolery!

Anyway, the reason the picture sums up life right now, no, actually ever since I decided years ago to truly follow the Lord, is that it shows what John the Baptist and Jesus were conveying in the following passages:

“I baptize you with water for repentance. But after me will come one who is more powerful than I, whose sandals I am not fit to carry. He will baptize you with the Holy Spirit and with fire. His winnowing fork is in his hand, and he will clear his threshing floor, gathering his wheat into the barn and burning up the chaff with unquenchable fire.” Matthew 3:11-12

“Simon, Simon, satan has asked to sift you as wheat. But I have prayed for you, Simon, that your faith may not fail. And when you have turned back, strengthen your brothers.” Luke 22:31-32

I don’t know about you, but it seems as if satan might be part of the great sifting that is going on in the church. The sifting that is Jesus trying to find the pure wheat that will be finally left at His feet for His use. For His glory. And I can tell you first hand, though purification is definitely what I am experiencing and desiring, I still feel like I’m up in the air, flying backwards on a suspended chain link swing in the middle of the Mall of America!