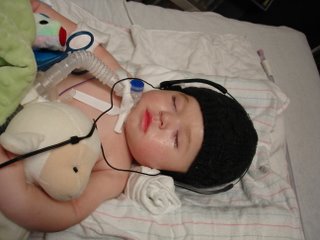 Here’s Noah with his “Edge” hat on, jamming to a little praise and worship, trying to get the acoustics down, because, seriously, his generation is going to need a band like u2 also!

Noah had quite a day…he had another CT scan and x-ray this morning, all of which came back showing NO abscesses! Everything was normal, except the grandiose amount of gas in his guts. Since we took the NJ-tube out for the pictures, we’ve been giving his little gut a break, and will do so through the weekend, so he’s on PPN which are nutrients via the IV line. So, though it’s quite bad manners, Noah is eating with his hand because that’s where his new IV site is. Since Noah’s blowout yesterday, he was a bit dehydrated and had a few boluses of fluids. Last night the nurses had to do blood draws repeatedly to check all his levels, which are all looking good, but as a result he went from a 33 hematocrit to a 23. The docs said surely it wasn’t because of the blood draws, and then ordered a bunch more tests, so the nurses had to draw 8ml…so yeah, he had his 4th blood transfusion today while his daddy held him. For those who don’t know, when they draw blood they usually “waste” 3ml each draw, so, it adds up. Go A+! Back to the boluses of fluids, well with 4 different antibiotics and flushes after each, Noah’s blood pressure was high and he had big fat juicy feet, so, he had a good dose of lasix, basically a diuretic or water pill, and filled his urine bag with 300ml of fluid. He was retaining just a tad bit of water…He’s stable, no temp, heart rate great, blood pressure back to beautiful, his skin looks fantastic and he’s been opening his eyes more and giving us facial expressions more and more. We are going to do some light therapy and sound frequency therapy hopefully this next week. He continues the acupuncture which is great!

That’s all I got for today…except I learned how to “loom knit” tonight and made Noah a hat, but it’s too small so I’m taking it to the NICU for one of the tiny babies. A dear new friend, the one who just went to Africa, came and introduced me to the “Knifty Knitter”. Now, I know I may be offending some official knitters out there, but I’ve really, really tried with the needles and to no avail, so for now, this works for me and it’s so fast! I’m not claiming to knit, I am claiming that I now can “loom”, so that’s pretty cool! We also went to my sister and her fiance’s Christmas party. Emily was the shortest adult there. She word pink and lots and lots of her dress up pearl jewelry, along with her fancy sheer tutu over her pink skirt for extra bling. Man, I love my kids!