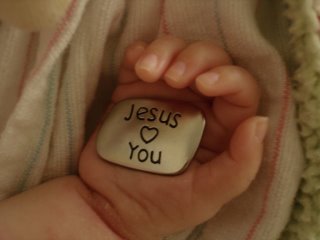 It’s December, as you all know. It’s just a reminder to myself as we walked in these doors during the heat of summer and now it’s freezing outside, with snow on the ground.

Today two dermatologists came to take a look at Noah’s major breakout. He cycles a really bad rash but we can’t figure out why. Anyway, they want to have a skin biopsy done on Monday because his skin doesn’t just look like eczema but is actually thick like leather on his arms. They said that could be related 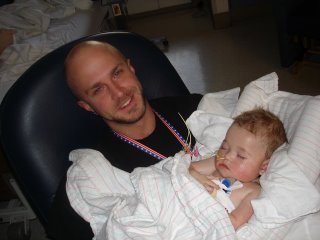 to a genetic or metabolic disorder. How crazy if the dermatologist figures out what’s going on with Noah rather than the geneticist…They’ll biopsy a pencil eraser sized portion of his arm and stitch it with one stitch. Then, the pathologists and docs will review it and discuss what they find. I’ll let you know what they say when/if we find out anything.

This is one of Noah’s nurses, Matt. He and Noah had guy time today while I went to the parent’s lounge and took a shower. They read some Psalms and then “gossiped” about the different nurses that walked by…I’m sure it was all nice talk, though…Anyway, it had been a few days since I had gotten a shower, so it was a very welcomed gift. Everybody give a cheer for Matt!

I have to admit I am a bit discouraged regarding Tuesday’s meeting and the conversations that have followed. I can’t quite wrap my brain around it and I don’t know if I could even put it into words, but it seems like there is a lot of hemming and hawing, along with a whole lot of the unknown. The feeling of not feeling like we have done everything for Noah that we can is really gnawing on me…I feel like there has to be more…what am I supposed to do, give up because no one knows? I give up on crossword puzzles, not LIFE!!! I honestly couldn’t live with myself if I did that!

I’m having a serious talk with Eve when I get to heaven…she’s getting an earful! That piece of fruit better have been the tastiest thing she ever consumed!!!!! She was the first mom to lose a child…What a crummy way to start out life on earth outside of God’s presence, to truly taste the sting of death in that way.

Anyway, this scripture, 1 Samuel 25:29, from The Message was given to us yesterday and it encouraged me in the midst of this whole situation…

If anyone stands in your way, if anyone tries to get you out of the way,
Know this: Your God-honored life is tightly bound in the bundle of God-protected life; but the lives of your enemies will be hurled aside as a stone is thrown from a sling.