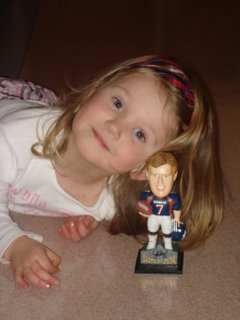 Tonight was family fun night in the halls of 3 North. Jason and Em picked up some dinner and the kid “goodie” was large pieces of activity paper with folding guidelines for awesome paper airplanes. I made two of them and we spent a good hour and a half having throwing contests in the vacant hall around the corner from Noah’s room. 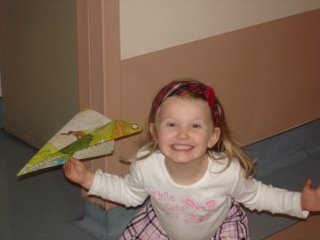 Sometimes Em would say the planes were flying to London, other times to South Dakota or to Ashes’ house. We still have to work on proper arm follow through and technique, but we had a blast, nonetheless. After a while, Em went into Noah’s room and came out with our very own John Elway Bobble Head, courtesy of some volunteers a while back, and placed it in the hallway, stating it was Mary Poppins and we were to aim for her. (Em’s a huge fan of MP. She got to see her in London 2 years ago and her friend is going to NYC to see her, so it’s all fresh in her mind again…) Anyway, Em asks John, “Does Emily get to stay up late tonight?” and then shakes his head, “YES” or, “Does Emily have to go to school tomorrow?” and shakes “NOOOOO”. After throwing for quite some time, Em came over to me, hugged my legs and kissed me and said, “Mom, I’m really having fun with you! I love you as big as the sky!” The positive moral of the story: we never would have had this touching moment if Noah weren’t in the hospital because there’s NO WAY in the world we’d ever own a bobble head. SERIOUSLY, who thinks up these things?!