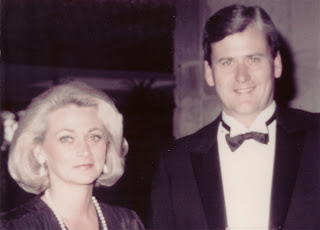 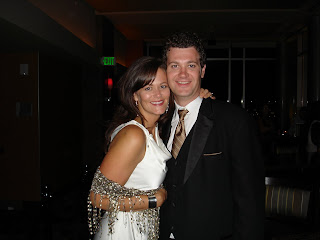 Here we are, two days ago, but Jason skipped the bow tie and went for the ‘modern’ tux…
We had a good night with old and new friends at the Children’s Hospital Gala on Saturday. It was surreal to be there, in such a different setting, one year later, seeing all the support the hospital receives in order to continue its work. This is a big year for the hospital as it is moving across town in about two weeks, transporting all the children on one day to the new facility. The city will actually be closing down Colfax Avenue in order to make the transition as smooth as possible for the transport.
I lost it at one point during the ceremony and had to leave when there was video footage and audio of a little boy that had been on a ventilator…I must say I don’t even know how his story played out, and why he’s a healthy, living boy today. All I knew was I needed fresh air.
There were probably 2-3 thousand people in attendance, so, you can imagine how strategic it was as we were leaving that we would ‘run’ into our favorite and least favorite doctors at the same time…I know God is doing continued healing in my heart because I can’t escape Noah’s docs. They work out at my gym, grocery shop at my store, picnic at my parks, they breathe my oxygen (just kidding)…you know what I mean.
The hosts of our table were very generous to include us in this years celebration. They also had an extra space so allowed us to invite a friend. We brought Dr. Julie, our friend who is a chiropractor and acupuncturist. She knew tons of people at the gala…lots of the doctors’ wives are her patients. She’s the one who did Noah’s acupuncture at the hospital, so attending the event inspired her to donate acupuncture sessions for next years silent auction.
As far as the women’s brunch, that was fun, too. The ladies did a wonderful job coordinating it and I know everyone who attended had fun. It wasn’t taped so I have no way to critique what I said except from memory, but I just pray that whatever was heard was encouraging. I’ll post it in blog form at a later date.
I’m headed to the mountains for solitude a half day early. I’m looking forward to it, though I am very social, so if I develop a new habit of talking to myself, please call me out on it…Until later.

10 thoughts on “Black ties and gowns”