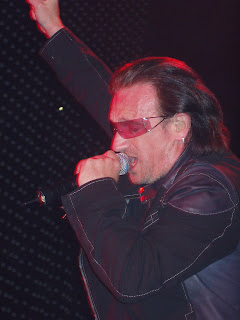 Yesterday Em and I went on a picnic with my girlfriend, her 3 children and her 9 year old nephew. My cell rang out, “Beautiful Day” (Jason was calling from England…no, I didn’t get to go this time…) My friend’s nephew said, “Hey, that’s U2. I know that song.” First, I want to thank his parents for exposing him to such a great band (smile). My friend said, “Why don’t you ask Adrienne why that song is on her phone?” So, this is how it went…

Nephew: Do you like U2?
Me: Yes. U2 is my favorite band of all time.
N: Why?
Me: Well, have you ever heard of a guy in the Bible named David? He wrote songs to God?
N: Maybe.
Me: Well, David loved God with his whole heart so he wrote songs that told of God’s glory, but also of his heart for God. Bono, the lead singer of U2 is kind of like a modern day David. He loves God with his whole heart.
N: Do you like the song, “Numb”?
Me: Yes. That was written by Edge, the lead guitarist of U2. His wife and he were splitting up and his heart was really sad…
N: He felt numb.
Me: Yep. He felt numb, so he told God about it.
Me: Well, the reason I have “Beautiful Day” on my phone is because there is a line in the song that says, “After the flood, all the colors came out.”
N: I don’t really listen to the words…
Me: I definitely do, that’s why that song is on my phone. Really, I could pick any U2 song to put on my phone. Have you ever heard about a flood that happened on earth?
N: Yeah, with a guy named Moses and an ark or something….(thinking face…)
Me: It wasn’t Moses…can you think of the guy’s name?
My friend: Sounds like ‘something ark’.
Nephew: Noah’s Ark! Yeah, that’s it!
Me: Yep, Noah’s Ark, nice work. Noah obeyed God and built an ark because God told him there would be a flood, the ark would keep his family and the animals safe.
N: Like ‘Evan Almighty’!
Me: Yep. Well, I had a little boy named Noah who got sick and died. That song is talking about the rainbow of God’s promise after the flood. We chose that song to be Noah’s song.
N: That is so sad. Do you know why Noah died?
Me: No. No one knows why Noah got sick and died. He stopped being able to breathe on his own and machines were keeping his lungs and his heart pumping. He didn’t open his eyes anymore and couldn’t move his sweet little body.
N: That is so sad. Losing a child is the hardest thing you will ever do on earth.
Me: (In my brain I’m thinking there is no way this kid is 9!)
Me: Yes. I imagine it is because I can’t think of anything harder.
N: No, there is nothing. What happened?
Me: Well, on January 12th, Noah’s daddy and I took Noah off the ventilator and gave him to God.
N: That is the best choice you could have made. Then he wasn’t suffering and he could be in heaven. That was the best choice. You did the right thing.
Me: That’s what we had to figure out, and we decided that God’s presence was way better for Noah than being in a hospital with no answers, hooked up to machines that were keeping him alive.
N: You made the best choice. If I were sick in the hospital, with machines keeping me alive, I would want my mom and dad to make that choice for me.
Me: (There’s no way you are 9!)
Me: Would you like to see pictures?

I showed my friend’s nephew two mini picture albums I keep in my purse that one of Noah’s nurses gave me. Some are pre-hospital, some are during the stay, ie. Christmas, my birthday, etc, and a couple are after we took Noah off the vent.
N: That is so sad. You made the right choice. I honestly think that is the most difficult thing anyone would ever have to do on earth, but you made the right decision. I wouldn’t want to be on machines suffering, I’d want to be free in heaven. You will always have Noah in your heart.
Me: (Finally unable to contain it, I burst into tears and said…) I can’t believe you are 9! You are so wise! Thank you for listening to my story! I can’t believe you are 9!

Of course, this was the day after we studied in “Breaking Free” by Beth Moore, that children ROCK! Why was I shocked?! The disciples were bickering about “Who was the greatest in heaven? Jesus called a little child and had him stand among them. And he said: ‘I tell you the truth, unless you change and become like little children, you will never enter the kingdom of heaven. Therefore, whoever humbles himself like this child is the greatest in the kingdom of heaven.” Matthew 18:1-4 (read the whole thing, it’s AWESOME, of course…)

Jesus went on to talk about anyone who leads a child into sin and the consequences they would reap. It was good for Jesus to drive home the point of leading one of his favorites astray, which was the second point of this passage. The first point, however, was to have faith and hunger for God like a child. Of course my friend’s nine year old nephew got it immediately. Simplicity. Trust. Faith unwavering, untainted, not seen through the eyes of the world but purely through the eyes of a child. Of course it took me longer…I had allowed my theology degree and my quote un-quote educated brain to be at the forefront of my life instead of being led by the Spirit of God. Once things were in order, trusting God was hard, but trusting Him brought peace.