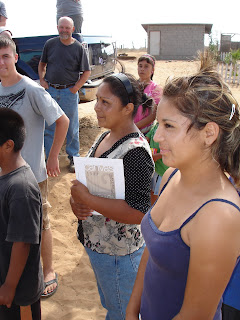 Imagine standing on the very lot your husband worked so diligently to buy for you and your family…where you would build your dream home together and raise your teenage daughter and sons. Imagine receiving the keys to your new home, not the one you and your husband had planned, nor sharing the second set of keys with your spouse but your daughter because daddy died two weeks after purchasing the land. Before I left for Mexico, I was working with a team to build a house for ‘a widow and her 3 children’. When I arrived, I met Antonia. She is a real person…a new widow. A single mom in a dusty town in Mexico, without running water or electricity. She is quiet and has a peaceful disposition. She is in her mid 30’s. She has a daughter, Viridiana who is 16. Her sons are Alexis, 11, and Eduardo, 8. They are all very quiet. I could see pain in her boys’ eyes…it broke my heart. Her husband died of stomach cancer two weeks after he purchased land for his family. He did not leave them life insurance, but he left them land…and that is truly an amazing gift! I am sad that Viridiana doesn’t have her dad around to measure every boy against. I am sad he isn’t around to turn boys away at their new door. My heart is grateful that the boys have a new basketball hoop outside their new home…I wish their dad was rebounding their shots. And as for Antonia, the beautiful bedding that was given to her, to go on a queen sized bed, will be warm, but not as warm as if she were sharing it with her husband. 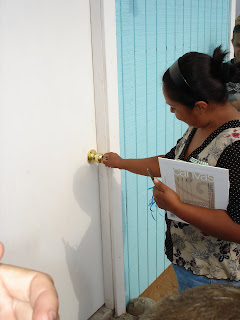 I’m grateful I know Spanish. I was able to ask her how her heart was doing…how her kids were feeling…apologize that the house we built in love wasn’t the casa she and her husband had talked of building one day. I told her that I didn’t understand her pain because I had not lost my husband. I did tell her about Noah and my hope in the Lord to one day see him again. She has the same hope. 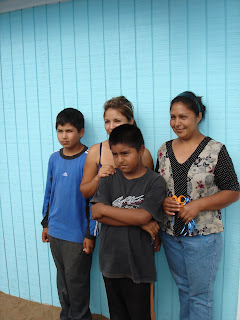 One day, prior to painting the house, I asked Antonia what color she wanted. She said, “Amarillo”. Her youngest, Eduardo, said, “No, mama! No me gusta amarillo! Azul!” I asked Antonia if blue was okay for her. She said yes. I asked which kind of blue, like ‘that’ guys t-shirt or the sky? She pointed to the sky…the ‘sky blue’ at the local mercantile store just happened to be the exact blue that we had painted Noah’s room. We painted the interior yellow (amarillo). Actually, that is kind of funny because prior to the trip, I sewed curtains for Antonia’s home. One set was yellow, the other two white with yellow trim. I just thought they would be cheerful. I didn’t realize they were her favorite color. 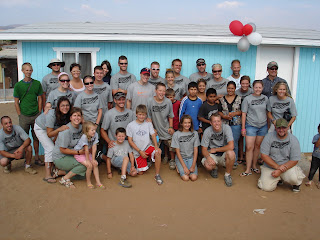 At the beginning of the dedication party we prayed for Antonia, Viridiana, Alexis and Eduardo, for blessings in their new home, for hope in the Lord, strength for new beginnings, and for their home to be a ‘Casa de Paz’. Paz is ‘peace’ in Spanish. You’ve probably read a little about peace on this blog…
Please pray for my friend, Jennifer…

8 thoughts on “For the love of his familia…”