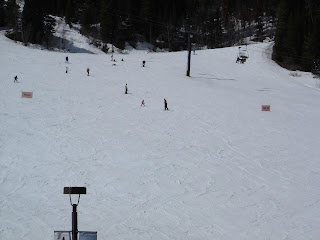 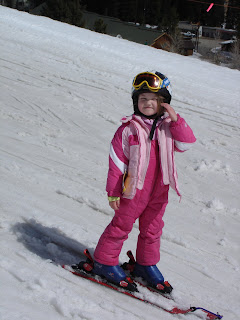 I am one proud Mama. In the middle of the top picture is a hot pink spot. That is Emily with her daddy next to her skiing in perfect ‘edgie wedgie’ form. She did ski school the first day so Jason and I were able to ski together. But, the second and third day, Em and daddy went and had a great time. Jason is the most patient man I know. They took the super chair lift up to the top. Emily said, “No one is going to believe I went all the way to the top of the mountain!” So, as you might imagine, last night when we got home, Emily’s bedtime adventure story included her soaring down the mountain, racing Curious George, who she beat, of course, since he stopped to eat some bananas someone had hung in a tree…

The other story was Emily helping a little girl on the slope who had taken a tumble. Her devotion was about sympathy yesterday, so the story was Emily sitting with the girl, encouraging her, while her parents, who had gotten a little too far down the mountain, hiked back up to get their child. I always watch her face to see her ‘imagine’ her bedtime stories. She really thinks about, not only the setting, but the feelings of the people she ‘helps’ and her own role in the story. Though most of ‘Em and Noah’s great adventures’ take place overseas, when we’ve been on a recent adventure, I try to incorporate that setting so that the memory is more vivid in her mind.

My earliest memories are from when I was 3 years old, so not only do I want to encourage good memories for Em to recall later, but I am aware that this time in her life will not be forgotten. I’ve always thought of ourselves as blank tapes onto which we record scenes and memories. Many are good, but many are bad and others we wish we could erase. The reality is that we can’t erase those ‘recordings’ but we can fill our hearts and minds with things that have meaning and eternal perspective, like God’s word. I was reading a book the other day that was actually talking about the brain and its storage capability. (I am intrigued by the brain since Noah’s was shrinking but no one knew why.) Anyway, the author wrote a sentence that vaguely brought back a scene from a horror movie I snuck (is that a word?) to see in junior high. Though that ‘scene’ in my head was 20+ years later and the fear and emotion did not show up again, the fact is, it came to my remembrance.

If there are things you wish you could erase from your memory, don’t be discouraged that you cannot. As we draw closer to God and read His word and spend time in prayer, our hearts and minds are transformed and renewed. We can’t erase those bad memories, but we can record over them, in a sense, by moving forward and looking to God for eternal perspective. We usually have the choice as to what we put into our heads, but often kids do not. That’s why we all took turns reading the Word to Noah so he would have that in his memory…so, in light of this entry, think about the power of your words to them, what you allow yourself and your kids to listen to and to see. There is power in the tongue to give life and to kill. There is also power in our eyes to give light to our bodies or make it a gate for darkness. It may seem like a long way out, but I try to pause and think about what Em or Jason or anyone I speak to for that matter, might look back and reflect on in 20+ years, and with all my strength, I try to choose to use the loving words instead of the ones that wound their hearts.