First of all, thank you guys for all the encouraging feedback, cheering me on to write. Don’t get me wrong. I love writing, but the practice of writing is something I’ve been out of for quite some time. This challenge came to me from some new friends in a blogging workshop I’m taking. There are no guidelines as to how content makes it onto a page each day, the gist of the exercise is just that: to exercise, to practice, to make writing daily intention. Today is my first day and my intention is to write each morning for that particular day, but I foresee some days when I may be able to write a few pieces or go through my drafted archives, clean things up a bit, and bring life to those. Honestly, I’m writing this paragraph just to get warmed up and I know it was boring to read.

I’m actually just typing stuff right now because, I kid you not, the moment I made my entry into the group official, my brain went blank.

Nothing. Nothing except writer’s block…deer in the headlights.

A friend from California texted me yesterday, asking about the challenge, mulling over if this is a good time to start the blog she’s always wanted to write. I told her how I had suddenly developed writer’s block.

“Write about writer’s block,” said the girl who’s been talking about starting a blog for years.

Then this is what the rest of our conversation looked like: 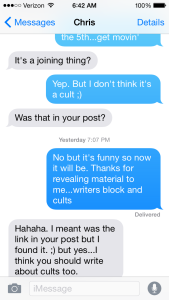 So, apparently I may write about cults during this challenge, too, who knows?

It hit me last night that the last time I wrote for 31 days in a row, it was while our son, Noah, was in the hospital. I had a lot more time in my life to sit and ponder way back then…and some of the entries of the next 31 days were birthed even back then.

I almost quit this whole challenge and blogging thing altogether yesterday. I’m not kidding. I’ve thought about hanging it up for probably 5 of the last 9 years, not every day, but many times…more on that in another post…

Let me ask you this…Have you ever felt so passionately about something, but the details it would take to make the thing happen seem insurmountable and aren’t even part of your scope of capability, so you wonder if it’s worth the time and energy? For example, I have a couple of friends who are doctors who started their own practices. Their hearts and gifts to heal people are spot-on, totally God-given, but the paper work that goes along with owning their own businesses near suffocates them at times.

That’s how I’ve felt about blogging…I LOVE it! I fell in love with authentic, candid writing in the last thought of sacred place ever. Noah’s hospital room was the safest and most vulnerable space for my heart, yet it felt right and the words began to flow out of me. His life and death brought about a sort of resurrection to the kind of writing I had once loved before I BS’d my way through high school and college papers simply for grades.

The practice of writing became a rhythm and it felt wonderful, but I could have done that in a Word document or a journal.

But blogging? Oh, you guys, blogging was interactive, there were other people who would show up, share their guts, as well, say, “ME, TOO!” or “I totally disagree but would love to discuss…” and my heart would swell. It was LIVE and RAW and UNFILTERED and suddenly I realized the things that went through my mind and onto the screen also connected to the hearts of real people on literally every single continent. And for a middle child who loves it when everyone shows up and gets along, it was epically mind blowing! The problem is, even though people would comment and share a bit of their lives, I, true story, didn’t know how to reply to them unless via a personal email. There was no “reply” button back in the olden days of blog world, at least not the way mine had been set up initially. And it got overwhelming. One. Little. Button. Had so much power to discourage me.

I’m telling you, I’ve written on a blog for 9 years now, but I’ve never known HOW to blog.

Then blogs were lighting up everywhere and there were great places where people could gather and interact and show up to laugh and cry and encourage and challenge one another. It was cool and weird at the same time to be able to connect to breathing humans in other parts of the country and world. I mean, I was born in 1972…to connect with people we used to walk next door and knock and ask, “Can Stacey come out and play?” I was working and writing through my grief, finding healing with each word I’d crank out, but I started listening to lies in my head, like, “Well, Noah’s dead so no one’s going to want to read here anymore. There are plenty of awesome other women who are a ton more fun and encouraging on the Web right now…you’re too raw and brassy…opinionated and loud…” And, to be perfectly honest, it was a battle in both directions: it wasn’t the attention the blog drew, it was the potential interaction with souls all over the world, and I wanted to care for and nurture and encourage ALL OF THEM, but I mostly wanted to sit crossed legged on a couch side by side or fall on our faces together on the floor and cry, but tangibly. And on the other side, some people would email me or comment and say, “Adrienne, you haven’t written in a couple of days (*I had written several times a day for 5 1/2 months while Noah was hospitalized.) and I come here to your blog to read it as a devotional.”

So, in my stubbornness, I pulled away from writing regularly. Seriously. A healing outlet where I found oxygen again, I pulled away out of stubbornness because of a couple comments, meant to be encouraging, like, “Adrienne, thanks for all you’ve written here…it’s come to be a place of refuge and quiet for me every day.” That I instead read, “Adrienne, you need to be more consistent. I’m addicted to this reality show you are living and you are messing with my programming.”

Jacked, right? I know. Though there could have been truth in either interpretation.

So, what the heck am I trying to say in this way too long post and why am I doing this exercise of writing? Well, a friend on Facebook who was a student at the college where I used to work mentioned me in a comment one day. I clicked on her link and saw the beautiful Jen Hatmaker’s mug shot on the screen where she pitched, without kickbacks, a very convincing few paragraphs of how, “there’s room for everyone at the table, how if you’ve ever wanted to blog or have blogged but were clumsy at it, there was this workshop by this guy who was brilliant and a smarty-pants, a way to take the drudgery out of blogging by learning some key things which would pay the likely returns of JOY in the process”…or something to that effect.

And I cried. I cried and read every word on the first sample lesson.

What? Jen Hatmaker thinks there’s room for everyone? Even me?

But seriously, even more, I have said to Jason a zillion times, “Sweetheart, I just want to write. Is there such a thing as me just writing and the technical stuff took care of itself? Like, someone could just show me how to do the actual act of blogging and then I’d just be able to freaking do it!”

So, here I am. And I’m no longer believing the lies there isn’t room for me just because I may not fit a mold, because it’s one of my own soapboxes:

WE ALL HAVE A STORY AND THERE’S ROOM FOR ALL OF US.