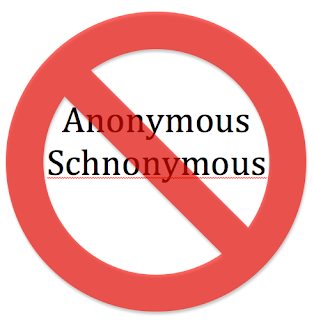 Don’t get me wrong, there are a lot of “Anonymous” posters that are civil.

I’ve had “Anonymous” posters that are kind, loving, thoughtful. People with great hearts and great intentions, just no blogger “profile”.

I’ve had “Anonymous” posters that completely disagree with me but are respectful enough not to be nasty about it. We have agreed to disagree and are able to respect each others differences. I don’t agree with every other blogger, but I don’t go there and publish rude comments.

However, as I’ve been in and out of “Blogville” for almost 4 years now, I have come across a lot of “Anonymous” posts that are so mean-spirited and hateful, judgmental and opinionated, accusing and hurtful, that I’m just not going to stand for it anymore…not on this blog, anyway!

Recently on a friend’s blog, “Anonymous” pulled the “Freedom of Speech” card. There is a difference between “freedom of speech” and “freedom of thought”…that is where anonymity on this blog is being cracked down upon and coming to a close.

We are all free to think anything we want and we are all free to disagree. However, mean-spirited people who “exercise” their “Freedom of Speech” by posting as “Anonymous” are abusing a right that was both fought for and came at a great price. Historically, let’s study for a moment the whole concept of “Freedom of Speech” and our rights to be heard.

“Freedom of Speech” is not an American thing. However, being an American and having studied our history some, I know that all of the “Freedoms” you and I enjoy and take part in on a daily basis were given to us as a result of those who have gone before us. And of those, we can name names…there are hundreds and thousands of “Freedom Fighters” that include, but are not limited to: brave ancestors who left their homelands to live here in liberty…Patriots like General George Washington who led our country to freedom from British monarchy…our first governing boards…men and women who fought physically for our freedom from other governing countries…and those in the service who still do…politicians who study the law and work diligently for the people…risk takers like Abraham Lincoln and Frederick Douglass who made war on slavery…people like Ernest Green, Elizabeth Eckford, Jefferson Thomas, Terrence Roberts, Carlotta Walls Lanier, Minnijean Brown Trickey, and Gloria Ray Karlmark, who weren’t going to be told they couldn’t get an education because of the color of their skin…names…there are many, many names…you have a name, your spouse, your children…

Our whole lives we are told that our names are important…yet why in “Blogville” do so many naysayers hide their opinions and bullying behind “Anonymous”? The bullies who tortured Phoebe Prince all have names…but they abused their “freedoms” and will be losing them shortly. Our faithful military, politicians and freedom fighters did/do not sacrifice their time and lives in order for the rest of us to abuse those rights but instead to be grateful for them and use them wisely and with respect.

Did you know that “Freedom of Speech” has limitations? It’s true:

“In practice, the right to freedom of speech is not absolute in any country and the right is commonly subject to limitations, such as on “hate speech“. “

“It is different from and not to be confused with the concept of freedom of thought.”

Here is the wording of the First Amendment of the Bill of Rights, for clarity sake:

“Congress shall make no law respecting an establishment of religion, or prohibiting the free exercise thereof; or abridging the freedom of speech, or of the press; or the right of the people peaceably to assemble, and to petition the Government for a redress of grievances.”

So, the key above is “peaceably to assemble and to petition the Government for a redress of grievances.”

So, for anyone caring to comment here in the future, you don’t even have to have a full length profile. You can simply use your first name. But use your name and be proud of who you are. And whether you agree with me or not is not the issue. I don’t write a blog for people to agree with me. I write a blog in order to get my guts out and live in honesty.

But before you head to another blog and “exercise” what you think is your civil right to be a mean bully and “tell it like it is”, think again…that’s not your right…and we Blog authors all have the right not to listen anymore.

So, go away “Anonymous”…go far, far away.

And, to any of you Blog authors out there that are over mean-spirited and ugly comments from “Anonymous”, please feel free to add my “Anonymous Schnonymous” button to your blog, too, as well as disable capabilities for “Anonymous” posters. Now we’ll see who truly cares about their rights to freedom of speech…